I am not always the hippest person when it comes to pop culture – which you probably can tell because  I used the word ‘hippest.’ At least I didn’t use ‘hep.’

Although I follow Fashion as my religion (at least for a woman my age; I would certainly never claim to be as smart as a teenager), I am not always sure who it is that I am following.  I love Kate Beckinsale’s sensual style. Just don’t ask me who she is.

Anyway, what I am trying to explain is why I am only now discovering “Mad Men.”

I’d heard of it of course. And I’m kind of surprise that I wasn’t immediately interested. I spent a good deal of my career working in television, and most of it predicting whopping advertising sales. (It was Sports. Beer paid my salary.) And my husband sold print advertising. You’d think we’d both be fascinated by a show about the advertising industry.

And then of course there’s the “period piece” aspect of “Mad Men.”  I mean, we are both period pieces ourselves. With a nostalgia for the sixties. The biggest friction in our marriage is the battle between The Beach Boys and The Beatles.

I’d been meaning to give “Mad Men” a try. But I could never find it. There must be something very compelling on opposite. Maybe “Toddlers and Tiaras” or “Pawn Stars.”

But Hurricane Sandy changed all that. We lost electricity for several days. Not a problem, though, because we have a big generator. So we had power to the TV – which is right up there with the well and the refrigerator.

But no cable.  Yikes.

So I bit the bullet and joined Netflix.

And we watched some movies and then an episode of “Mad Men.”

And we were hooked. We watched a whole season that week.

WordPress is suggesting I add a photo here.

WordPress’ algorithm must be as much of a period piece as I am. 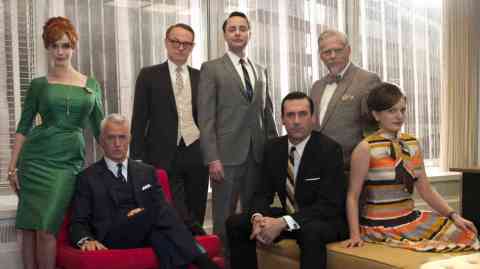 In the second episode, my husband and I started screaming at each other, “Look at the wall! Look at the wall!”  There was his mother’s gold “tree sculpture” wall art spreading its 1960 limbs all across the living room set.  That sculpture was still giving me the creeps in my mother-in-law’s parlor in 2003.

I love that kind of kitschy accuracy.

I love the old undergarments. It is so cool to see Big Girl panties (like I still wear) and a full slip. I wore a full slip until 1968. If you think your bra straps fall down a lot – you should see how slip straps slip.

And he likes the old-fashioned ideals.

Like in the episode we watched last week. We have been able to catch up by watching two episodes in a row on Saturday nights. (That way we don’t miss “Pawn Stars.”) So we are now up to Season 5, and it’s 1966.  Sterling Cooper Whatever has taken out a stupid want ad in order to shame their competitors,and as a result, they have an office full of African-Americans applying for a job. So the company has shamed itself into taking the ad seriously. And they do. Roger informs all the applicants that they have a position open for a secretary, and so all the men can leave.

And I remarked to my husband, “Remember when the jobs were listed in the paper under “Help Wanted-Male” and “Help Wanted-Female”?  I can’t believe I looked for a job that way and never realized how crazy it was.”

And he said, “It wasn’t crazy. There was nothing wrong with that.”

Trying to keep my face from becoming too purple, I took a breath and said, “Come on, how many jobs really require you to be a man or a woman?”

“Lots,” he said – just because he is going through his contradictory-ass phase. (I am hoping that he has only two more years in this phase, but I have heard from my mother it usually lasts for ten.) 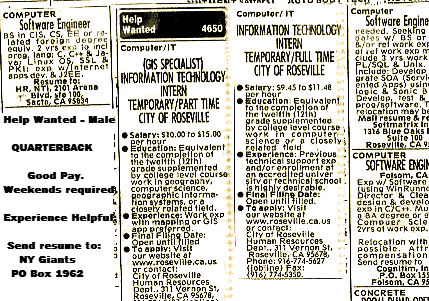