I stopped for gas a few days ago at one of the busiest gas stations near my home.

So, yes, it was a Cumberland Farms. I don’t really know if these convenience stores exist all over the country or just in New England, but if you aren’t familiar with Cumby’s, let me just say that they usually have a multiplex of gas pumps, lots of junk food, lottery tickets, and relatively nonpoisonous coffee. Oh, and milk. That’s where the ‘Farm” in Cumberland Farms came from. My father always swore their milk was fresher than the supermarket but I have my doubts. (Of course, now that my father has passed away, he is conferred with absolute perfection, so it must be true.) I will say this for Cumberland Farms – their English Muffins are about the best in the world. Thick, hearty and inexpensive. I often pick up a couple of packages when I stop for gas.

As usual, Cumby’s was jammed. All twelve pumps busy – oh wait, except that one over there… I swerved over to that lane. No wait again, that pump had a yellow hoodie over the nozzle. Which is why no one was there. But I was now in that lane, so I figured I would just wait here for the person at the pump ahead of me to pull out. No swerving required.

So I sat and watched all the folks stand by their cars and pump gas.

And so, thanks to the little gas pump with the bag over its nose, I got to witness a kindness.

In the passenger seat in the car to my left was a young teenage girl. If I had to guess her age I would say probably around 14. She had long brown hair parted in the middle like most girls her age. She had glasses. In my imagination, I thought that she was deep into her phone while her mother pumped gas.

But then…  she got out of the car. She walked over to the car directly in front of me. In that car, in the backseat was a very old man. And an old woman had just exited from behind the wheel as the girl approached.

As the old woman swiped her credit card, the young girl picked up the pump handle, unscrewed the gas cap from the car, and started filling the tank.

I did not see any conversation between the two. The old woman exchanged pleasantries with the man who was pumping on her right. The girl just sort of stared into space and pumped.

The pump did that little jumpy thing to shut off automatically when the tank was full. The girl replaced the nozzle in its holder and strolled back to her own car, and got in.

She still had not spoken with the old woman whose car she had just gassed up.

She just did it.

I tried to catch the young girl’s eye, and when I did, I smiled at her.

She smiled back and gave me a ‘thumbs up.’

Now it’s possible that the girl’s mother told her to go over and pump that lady’s gas. But I didn’t see that.

Or she knew the old woman and was expected to help her. Except they never even had the shortest conversation.

Or she was dreaming of getting her driver’s license and pumping gas let her fantasize that she’s taking care of her own car.

Or she was on her mother’s shitlist for some reason, and thought that she could score some points to redeem herself.

Or even – perhaps there was a boy at one of the other pumps she wanted to impress.

Yes – there are a number of rather selfish reasons the girl might have had to do an unselfish thing.

But here’s what I prefer to think:

The girl thought of her own grandmother when she saw that woman and she hoped that someone would be just as nice to her grandma.

Because isn’t that what all of life is?

Everyone is loved by someone, and we should treat everyone like we would want our own loved ones to be treated.

We are all each other’s loved ones. 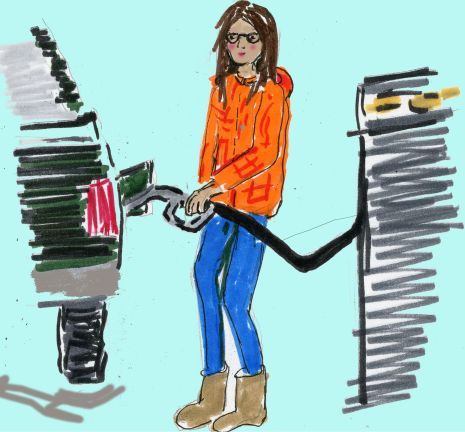