Recently I overheard two women discussing how their lives turned out so differently from what they had imagined.

It got me to thinking about how that might be true for me too.

Only when I really thought about it, I could not claim my life was different from what I had pictured, because I realized that I had never really pictured it.

Oh, I had some vague daydreams about a job and a house and a family, but when I say “vague” – I mean this faint, shadowy idea that someday I might be an adult, and adult people did things like that.

Because, to tell you the truth, I couldn’t really see it.

I never really thought about my future. When I was a kid, I didn’t fantasize about being a grown up. I didn’t especially see an advantage to being an adult – except for the freedom to to wear makeup and not eat vegetables. It seemed to me that kids had a lot more fun. Grownup fun seemed to revolve watching kids have fun. I’d rather do the fun part myself.

And I didn’t think too much about having money of my own. Or transportation. I lived in the kind of town where I could walk just about anywhere. And I felt rich if I had a dime for a candy bar, or went to the movies once in a while.

I liked the thought of being in high school, and listened to the stories my sisters told when they got there, and of course envied that they got out of the horrendous parochial-school uniforms, but I didn’t visualize myself there, dreaming up stories about walking through the corridors or having lunch with my friends. I just eventually got there, and talked to some kids, and made it through.

I didn’t think much about college either. When it came time to apply, I looked through college catalogs in the guidance office, and then just applied to Nurses’ Training, mostly because my mother was a nurse and I thought (even in 1969, when I was rebelling against everything) that she was the coolest person I knew.

I didn’t like Nursing though. I quit – spontaneously – I just took a bus home one day, and told my parents I didn’t like it and could they give me a ride back to get my stuff.

I got a job at the Phone Company. It was really boring. So I figured I needed to go back to school. I went to my old high school and back to the same guidance office, and asked my old Guidance Counselor what to do. He said to apply to the state schools, and so I did. And so I went there.

And after I finished school, I took a job. Any job. The first job I was offered. This wasn’t easy because: 1) The economy was terrible; and 2) I was an English major.

It was an office job – typing, filing, shuffling paper. But I liked it. And the Director of Finance saw that I was pretty smart and told me the company would send me back to school for an M.B.A.

And then spent the next thirty-five years developing budgets and playing with numbers.

And it was okay. Good, actually.

But I kept stumbling through the dating rituals. And eventually, almost 40, I found a guy I liked who liked me too. We were temperamentally very different but we seemed to suit each other just fine.

I married at forty. I didn’t have my dream wedding, because I didn’t have a dream.  But I had a wonderful, sweet wedding that mimicked all the nice weddings I had been to in the past.  I tried on two gowns (from the sale-sample rack) and bought the nicer one.

And we’re still married 25 years later. And we bought a house, and then built a house, and have had a slew of cats (I think the correct term – like pride of lions or school of fish – is an enigma of cats). And now a dog.

Did I plan any of this? Well, I must confess, you don’t build a house on whim. A huge amount of planning went into our home. But the pertinent question here is:  Did I ever visualize myself living in the home as we planned it?  No.

So I wonder – Why don’t I daydream? Why don’t construct elaborate scenarios of the future?

It isn’t lack of imagination. I can certainly create all kinds of elaborate stories. I wrote a whole NOVEL, for God’s sake. Ninety-two thousand words imagining complete lives for people who don’t even exist.

I think the answer is this:

This surprises me. On the surface, I never thought I was.

But now after all these years, I see that it is true.

I am afraid to envision a future. To create a hope of how my life will turn out, because it may not turn out that way. I have always been afraid to be disappointed.

So I have stumbled through life without a plan – accepting what came. Delighting in it if it was good (which it mostly was) and shrugging off what was not so good as just another passing experience.

But now I am old. I am past my fear of disappointment. Past the worry of ruining my life.

I know now that I am strong enough to live poor, to manage adversity, to live alone if need be. To handle whatever may come. Because I have welcomed “whatever may come” for more than 65 years, with what I think is grace and balance.

So now I want to imagine.

I want to build a castle in the air.

To create for myself one remarkable crazy breath-taking daydream.

And have it come true. 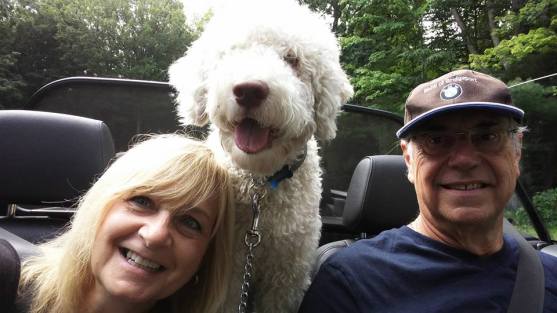 Ready for an adventure!