I’ve been through a lot of election cycles.

I don’t remember Truman (though I was alive during his presidency)  and I vaguely remember Eisenhower as president… not as candidate.

The first election I remember is Kennedy’s. I was nine. I remember how excited the nuns were back in 1960 – with a Catholic running for president. The sisters still wore their black habits back then, and were not allowed to adorn them in any way. But every nun at my parochial school wore a Kennedy campaign button pinned to her (usually enormous) bosom.

So this is the FIFTEENTH election for me.

I am no novice. But I am still shocked.

Campaigns have gotten much longer and much louder and much much nastier.  It is certainly not original for me to say that Campaigning has overtaken Governing in the way politicians spend their time.

And because of the ubiquity of the internet, in some ways we are more of a democracy than ever. Because EVERYONE can campaign.

All your friends, your family, your favorite websites – it is no longer just at the dinner table that folks are arguing over politics. It is EVERYWHERE. It is CONSTANT.

Sometimes it is thoughtful. But most of the time it is crass.

I have very low blood pressure, both physically and temperamentally. It takes a lot to get a rise out of me. But the last few weeks have had me aggravated and angry and my blood is throbbing in my ears.

I got into a Facebook pissing match last week with a good friend. She posted a meme that was easily disproved, and I was determined to do so. But I could not. The more data and sources I supplied to discredit her post, the more staunchly she defended it. In the end, I only convinced her of one thing: that I am an asshole.

I have regretted the argument all week.

And yesterday I took a pledge. I posted it on Facebook not only to my friends but to the general public. I see some spots where I could have expressed myself more eloquently, but it will serve the way it is.

It may not tone down the rhetoric. But I feel better. And perhaps my blood pressure will return to somewhere closer to its normal ‘I-faint-if-I-stand-up-too-quickly’ level. And I will survive until November. 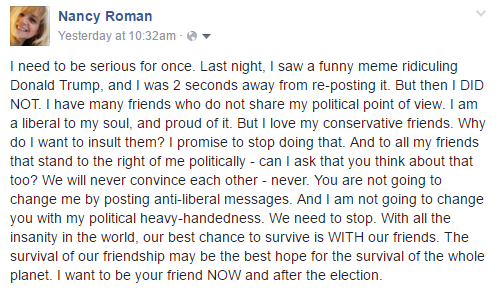