Not Quite Right, Dr. Freud

In honor of reconnecting with my very best friend from childhood, here’s a post from 2012 about Doris and one of our favorite games. I hope she will forgive me for my deep, horrible secret:

NOT QUITE RIGHT, DR. FREUD

I was reminded the other day of Freud’s theory that by age six or so, a young girl is devastated by the realization that she doesn’t have a penis. She experiences this as a great loss that affects her for the rest of her life.

I think I read about Freud’s claims when I was about fifteen. I laughed my ass off.

ALL the girls I grew up with thought boys were stupid, and penises were especially stupid. As far as envy goes, I didn’t even think peeing in the snow was worthwhile.

If anything, I felt a little sorry for boys. I figured they must be very jealous of our nice hair and pretty clothes.  And what boring toys. Lincoln Logs?  Really? When you could have a gorgeous Revlon doll with curly hair and real eyelashes?

As a kid, my favorite past-time was acting out scenes from movies and TV. My friend Doris and I would recreate movies in her backyard. Our biggest problem was that most stories were about boys. Yuck.

We’d stage Shirley Temple movies–Big Three Theatre (Hartford’s Channel 3 at 4:30) had a Shirley Temple movie at least once a week – “Heidi”, “The Little Princess”, “Captain January”. And of course we played Annette and Darlene from the Mickey Mouse Club. Then around 1959, there was “Tammy and the Bachelor” and “Gidget”.  I’d sit through two showings at the Cameo Theater, and I was good to go, with near-perfect recall for all the best scenes and lines. Doris never dared to challenge my recollection.

When I was nine we hit the drama jackpot: “Pollyanna.”

For me, “Pollyanna” was the perfect movie. Hayley Mills was so adorable. She had a great accent, and clothes that were supposed to be ugly but were really fabulous. She had long blond hair. She lived in a big gorgeous house but she was an orphan too. And best of all – she had TRAGEDY.

We used Doris’ swing set as the tree that Pollyanna fell out of. We learned to jump off the crossbar of the swing and land in the most delicately terrible (but harmless) way. I must have jumped off that bar two hundred times that summer.

The tricky part about “Pollyanna” was sharing the role with Doris. Pollyanna was really the only girl in the movie. Pollyanna’s sidekick was a BOY. Jimmy Bean was played by Kevin Corcoran, and he was a cute little kid, but I never ever wanted to be the boy. So we took turns. Grudgingly.

But I had a secret. When it was my turn to be Jimmy, I changed it around in my head. I was actually Jenny, who was just pretending to be a boy because the evil orphanage police were looking for me. I was a runaway. I had cut off my hair as part of my disguise. This explained quite well the fact that in actuality I had hardly any hair. This little subplot became for me just as sweet as playing Pollyanna. I think it was the beginning of my fiction career.

I never shared my private storyline with Doris. When I was Pollyanna, she was Jimmy. Period. 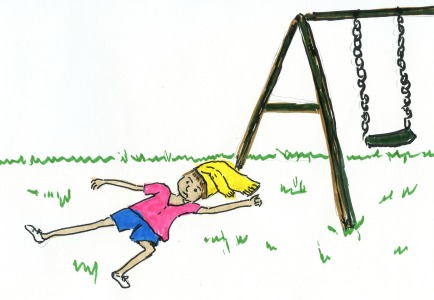 Me, as Pollyanna. I tied a yellow sweater around my head to simulate long blond hair. And yes, my arms and legs were that skinny.