The Perils of a Long Marriage

A while ago, I started to recognize the symptoms that I have been married a long time.

Like when I said to the salesman at the kitchen shop, “I might be tempted to buy this skillet if you could give me a ten percent discount.”

And I was even more scared after I complained about a car that had parked too close to me.  It made it really difficult to get out of my parking space and I have a hard enough time of that already.  (My mother looks for four spots – think of the letters HH –  so she can pull through with plenty of room and never have to back up. I am sure I am just a few years away from that.)

Anyway, I was griping about this close-parker (like Seinfeld’s close-talker) and I said, “It was a piece-of-shit Mopar.”

Holy crap, it even sounded like my husband’s voice.

It is just a matter of time before I hear myself talking about the idiots at the bank.

And then it is only a short hop from there to asking the McDonald’s kid, “Can you put some ice in my coffee so I don’t scald myself and sue you?”

But I just found that it works the other way too.

My husband and I received a wedding invitation, and he was really excited about dressing up. (It appears that I may not be the only one in my family who secretly wants to be a princess.) To be fair (which I rarely am), over the last year my husband has been my inspiration in eating healthy food and getting in shape. And he has discovered what I have known since age four –  that it is fun to buy clothes and look great.

So he bought himself a gorgeous new outfit. Honestly, it was nicer than what I was planning to wear. Which was fabulous news – because I got to shopping again.

And two days before the wedding, he said to me over breakfast:

“I’m really stressed. I have a hair appointment today, and I’m so afraid that the hairdresser will screw it up, and I’ll look stupid.” 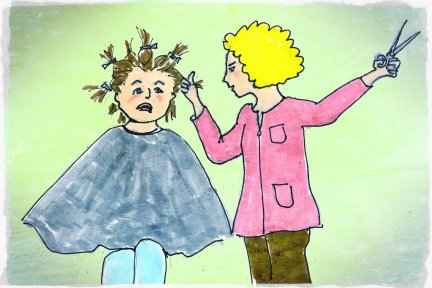 This is me at the salon. But just picture someone a bit balder, and I don’t have to draw a new illustration.