Taking My Own Advice

Time to go to the beach.

In my bathing suit.

We put the top down on the convertible and went to the beach.

Our little sportscar has a miniscule trunk but we managed to fit:  one umbrella, two beach chairs, blanket, cooler, and one big duffel with towels, a change of clothes, sunscreen, and books and magazines. None of the stuff in the duffel will my husband ever use. He won’t go in the water, so doesn’t need the towel. Since he won’t get wet, he won’t need a change of clothes either. He’ll say “Later” on the sunscreen and then fall asleep before he opens his magazine. And of course he’ll come home sunburned (because he will put up the umbrella but won’t lie under it). But it makes him feel better to have all that stuff. Just in case.

All this shit has to be schlepped from the car to the beach, but we’re good at it. Especially because we stop every thirty feet and rest.

Then there’s big decision. What spot on the beach do we take? Being childless, we tend to enjoy watching kids play, but on the other hand, the little monsters can be so LOUD.  But if we pick a spot with no kids, then for sure within the hour a family of screamers will park next to us. The best thing to do is to try and fit in between people who have just one kid. Kids don’t yell too much without brothers and sisters.

So my husband spears the umbrella down like Columbus claiming the sand for Spain. I look around. I like what I see. Middle-aged people.

I wrote a serious essay two weeks ago – reminding women that they need to enjoy life.  “Put on your swimsuit.” I said. “You’ll never be younger or more beautiful than you are right now.”

And these words rang especially true as we all lost wonderful Nora Ephron this week. Nora said, “Oh, how I regret not having worn a bikini for the entire year I was twenty-six. If anyone young is reading this, go, right this minute, put on a bikini, and don’t take it off until you’re thirty-four.”

Thank you, Nora. I believe that and I said so.

But practicing what I preach is not always easy.

I want to wear my bathing suit no matter what I look like. But what I want to look like is: GOOD.

This is hard to do amid all the young tan slim beauties in bikinis.

So I don’t want to be near any. (My husband may feel differently.)

I feel much better amongst lumpy thighs and loose upper arms and round bellies. I am glad that the beach is full of imperfect bodies. I’m glad that women are taking my advice and donning their bathing suits and enjoying the beach. But I confess that the petty side of me is glad only if it makes me look better. On the outside, I rejoice when women of all sizes celebrate their bodies. On the inside, I am glad that some of those bodies are older and chubbier than mine.

Mean-spirited it may be, but I felt so good, I walked down to the water. No cover up. And to the bathroom. That pretty much means that I was seen by everyone on the beach.  I was tempted however to stop at every blanket and say “I’m sixty-one,” to put my body in context, so to speak.

But then the inevitable happened. A family plunked down their stuff just in front of ours. Mom, teenage daughter, and two young children.

They spoke Russian. I recognize this language well – I’ve watched a lot of Russian mob episodes of “Law and Order.”

My guess – and I always make up a history for everyone I observe –  Mom from Russia was one of those mail-order brides. She was now in her mid 40’s. Still attractive, but a little pudgy all around. This is not an ethnic stereotype – just a typical mom stereotype. The teenage daughter was about 18. She was from Mom’s first marriage. The other two kids  – a boy around seven and a girl around five – were progeny from Marriage #2. Both husbands are now gone. Mom likes it this way.

It was the eighteen-year-old who caught my attention. (Although now that I think about it, she was most probably seventeen. If she were eighteen, she would have had at least one decal…er, tattoo.  Navel piercings don’t count in judging age – I think you can have one as soon as you give up your Dora The Explorer beach towel.

Natasha (as I had already named her) was skinny. Really skinny. She showed up in a short ruffled skirt and her baby sister’s undershirt. I was also wearing a little skirt (my tankini is skirted, as befits my age, but no flounce, also befitting my age) and I thought for a moment that she had a tankini too. Then she peeled off her outer layer.

Underneath was the tiniest of bikinis like clear merlot. And beautiful, perfect skin. Lightly tanned.

She was gorgeous. And sullen. But then again she was a teenager. I don’t understand Russian, but I am quite sure she was rude to her mother.

Full of herself, I thought. Out to flaunt her loveliness to all of us ordinary humans. God, I hate young people.

But then the weirdest thing happened.

Natasha turned to lie on her back and I saw that the highest part of her was her jutting hips.

And I remembered that at seventeen, I had a bikini too. But I wasn’t flaunting my youth. I was trying to seem like a normal teenager. When what I really thought I was… was: Hideous.

If I want women to celebrate their bodies, why wouldn’t I want this girl to rejoice in her loveliness? I wish I had known back then how beautiful I was. I was suddenly certain that Natasha was as self-conscious and insecure now as I was back then.

And I said a little apology to Natasha.

In my mind, of course… why would I ever apologize to a teenager? 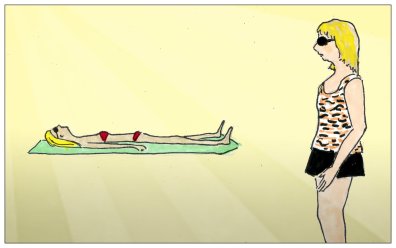