A Tasteless, Yet Gratifying, Tale

Somewhere around my fifth year of college, I rediscovered my shyness.

Inexplicably, I felt thirteen again. Awkward, unattractive, tongue-tied. I stopped dating. I forgot how to flirt.

It was a phase. It lasted ten years.

When I hit thirty, I figured it was time to do more than work and go to school. So I started going out again. One of my coworkers was a very ‘popular’ young  woman. She was beautiful–blonde hair, luscious lips, amazing breasts, long legs. We got along pretty well at work, so when she asked me if I wanted to tag along to the bar one evening, I went.

I hated it, but I kept going, and little by little, I hated it less and less. My friend – let’s call her Marilyn – was a great teacher. She told me that once she sprouted stupendous knockers, boys started coming around, and she never looked back. Now my knockers are completely unstupendous, but I have a nice personality.

We started to go out twice a week.  Somewhere around Year Two, Marilyn got married, but that didn’t slow her down. She lived to flirt.

Watching her, I saw that although sex appeal had a lot to do with a beautiful face and body, confidence and friendliness also played a part. I can be friendly. And while not exactly confident, I relaxed a bit, and a few men responded.

And a funny thing happened. Marilyn got competitive. She could make men pant (okay…so I found out later that’s no so hard), and she began to thrust those big boobies between me and any man who showed interest.

I figured she was going through her own phase.

But sometimes it wasn’t much  fun. She started pointing out my shortcomings to men, and I had quite a few, so she had lots of material.   She just couldn’t share even a fraction of the attention she was so used to.

To be honest, I continued to stay friends with Marilyn out of guilt. Because early on, I had been happy to hang around with her and benefit from the crowd of men she drew. But surely, she could have given me just one of the little fishies she threw back.

And one day we went to the beach.

Marilyn was in her glory. Red bikini, golden hair and golden tan, she basked in more than the sun.

And I sat on my blanket– plain, white-skinned, flat-chested, and I watched her strut. I watched the familiar reaction. For hours.

It’s okay, I told myself, I’ve got a nice novel and it’s a gorgeous day.  But I felt pretty bad.

Towards the end of the afternoon, Marilyn took yet another stroll, to the joy of all the surrounding men.

And on her way back, with her head high and her arms swinging, I saw it.

The telltale little string hanging down from her bikini bottom for all the oglers to ogle.

I felt much better. 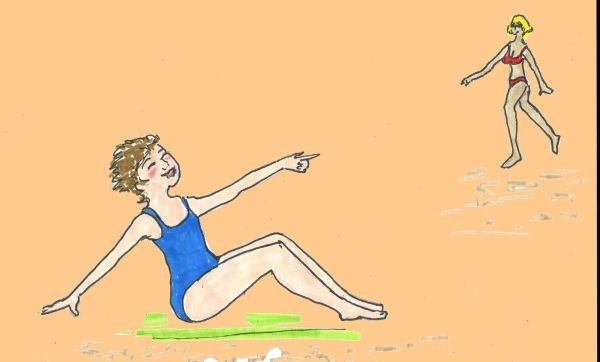