How I Almost Went To Hell

Back in the 80s, I spent about a year as the general manager of a Cable TV system.  It was a small system in a little Connecticut town, but it was owned by one of the big giant cable operators. I’m sure you know the one, because they are The One.

I had been a regional business manager for Cable TV before Giant Cable bought my company. I did budgets and accounting. A lot of thinking and planning. I’m a good thinker and a good planner. I’m not such a good carry-outer.

Humungous Cable did all the budgeting at their humungous corporate headquarters. So they didn’t want me to do that. They actually expected me to manage the operations. They may have been confused.

It wasn’t all bad. It turns out that my predecessor had won Ginormous Cable’s company-wide competition for the biggest quarterly subscriber gain. He gained a ton of subscribers the old-fashioned way –he didn’t disconnect anybody. (It was a wonderful time to not pay your bill). Only he quit before the prize was given. So after I had been the manager for one month, I went on an all-expense paid vacation to Bermuda.

When I got back though, Gihugic Cable expected me to manage. I had an office full of dirty ancient soda bottles, and employees who came to work in sweats. I fired a woman for stealing and she sweetly promised to send her boyfriend to meet me in the parking lot.

And those were the high points.

Honkin Cable bought a honkin shopping network. At my little system, we already carried a little shopping network. This was long before the era of 600 channels. The most we could squeeze out was 35. I had no room for another. But it was a no-brainer for the corporate honkers. Take off Itsy-Bitsy Shopping and put on Mondo Shopping.

No big deal. Except that Itsy-Bitsy Shopping Nework offered one program that didn’t involve crappy jewelry. Every morning at 9:00 they broadcast a Catholic Mass. It was a live broadcast, and people could call in the evening before with their prayers, and they would get mentioned during the service.

Did I mention that this little town was full of old Italian ladies?

The letter-writing campaign was surprisingly well-organized.

Then I started to get visits. From Nursing Home Administrators. And Nuns. And Priests.  Then some guy who said he was the Bishop, but I can’t be sure. I didn’t ask for his ID.

I waited for the Pope.

One of my sweatpant-clad employees came in one Monday to tell me that I was the subject of Sunday’s sermon at her church. They not only told people my name, but they knew somehow that I used to be a good Catholic girl.

But going to Hell.

(Now you may be thinking…‘But you went to work for Cable Television – certainly you already knew you’d be going to Hell’….but I really thought I could run a customer-friendly cable operation. I was young.)

I managed to escape though. I called Itsy-Bitsy Shopping and begged them to let me cherry-pick their Mass, and play it on our own local access channel.

And Itsy-Bitsy Manager must have also been afraid of going to Hell, because she let me.

And I quit shortly after.

I went back to Budgets. I like Accounting. For the most part, my office isn’t filled with unhappy priests. 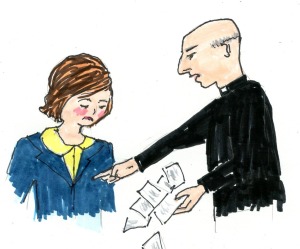