Too Much Togetherness = Too Much Information

Several years ago, we built our dream home.

Many people warned me that building a house is a dangerous test of a marriage.  But to my delight (and surprise) my husband and I turned out to be terrific team.  Together we bought a beautiful piece of property and designed the house (with significant help from an architect; we’re not insane).  My husband served as General Contractor, and he knows so much about everything that I was often overwhelmed with awe  I served as Director of Taste.  I also carried lots of stuff.

And our dream house got built.  Miracle house, really.  Especially when you consider that after five years of building it, it got struck by lightning ten days before we were to move in.  But that’s for another story, when I can see the humor in it.  Check back in twelve years.

In the planning process, we attended lots of open-houses  in ritzy neighborhoods. I had a camera in my purse, and we stole plenty of great ideas.  We have parquet floors, a chandelier that descends on a motor for dusting, a double staircase, and a stove big enough to feed the Duggars.

And we also have a fancy master bath.  It has all the great stuff we saw in all the master baths in all those snooty houses.  And now I see the major flaw. Two flaws really.  Two sinks. 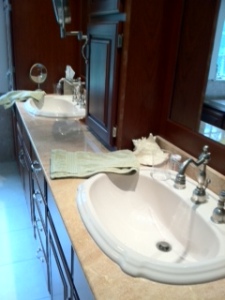 Bathroom sights are not pretty.  And bathroom sounds are worse. I don’t want to hear him hocking up his morning phlegm.  That’s just gross.  It’s not that I never have phlegm myself; but I don’t wish to share it.  And besides, I have very feminine phlegm.

What I also don’t want to share is my mirror time.  I spend a lot of time with my makeup mirror. And it’s not that I don’t look adorable putting on my mascara.  I don’t want my husband to see that I really only use seven products out of all the stuff that I have on multiple shelves.  If he sees how much stuff I don’t use, he may think I don’t need it, and he may ask if he could maybe have part of a shelf for his deodorant or something.  And, well…no.  He can’t.

And while I am on the subject of bathroom design flaws, here’s another:  the “toilet room”. 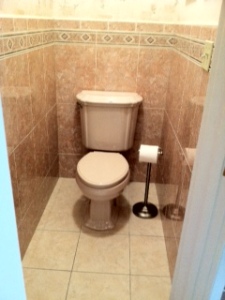 Just because the toilet has its own little door does not mean you can use it while I am getting ready for bed. And even though it has its own exhaust switch, that doesn’t mean it has become a soundproof chamber. You aren’t covering up any sounds, just creating another one that I call “Defecation with Fan.”

Don’t get me wrong.  I deeply love my husband and I love being married.  I just want to be single in the bathroom.