This weekend I went to the local country fair.  I think the official slogan is:

Eat Crap and Look At Cows.

I didn’t think the fair would start with a moral dilemma, but there I was at the gate faced with a ticket choice of $8 for adults or $5 for seniors.  Since I am over the age threshold for seniors, I can legitimately save three bucks. So the unethical thing would be for me to say I was younger, and pay MORE to get in.  But I wanted to.

My husband waited patiently.  He likes to save money, but he knew better than to ask aloud for “Two Seniors” without getting the lay of my land, so to speak. He just shrugged.

“One senior and one child?” he finally asked.

Well, that was depressing, so we headed right for the Eat Crap section of the fair. I displayed great self-control:  fire-roasted corn-on-the-cob, french fries, and a root beer float.  For fair fare, that’s practically health food.

We spent some time at the truck pull. My husband likes to see trucks haul shit.  He cheered like mad for the Ford trucks.  He booed when the Chevys come out.

On to the Look At Cows portion.

We met a young girl waiting to show her calf. We discovered that she LEASED her calf.  Part of her high-school agriculture coursework. So there’s some farmer out there who gets paid for letting kids take care of his herd.  I am thinking that cow leasing could be a nice second career for me.

The chickens were loud, the rabbits were timid, the pigs were indifferent.  But the sheep were my favorite.  Sheep like me.  Just look at this little guy smiling at me.  He’s positively flirting. 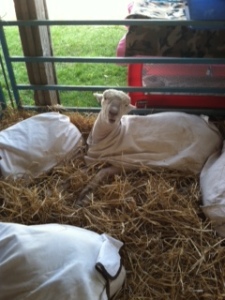 My husband says sheep’s mouths just naturally curve so they look like they are smiling.  But I know better.

I have a special rapport with sheep.  I think they recognize a kindred spirit.

About a quarter of a mile down the road from our house, there is a sheep farm.   The fields there are beautiful, and the neighborhood is quite upscale, so the sheep are very satisfied. 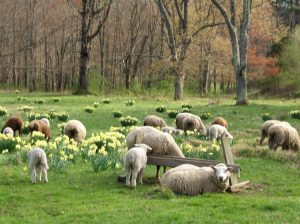 I stop daily on my way home from work and say hello.  They are always friendly.

One day last year, when I drove past the farm, the sheep had escaped and were all milling around, just chillin’  in the road.  Unlike the teenager at the fair, I have not had any coursework in animal husbandry, but I figured the least I could do is knock on the farmhouse door, and let them know that their lambs were loose.

But when I got out of the car, they all came to meet me.  So I walked to the field and they came!  I was a shepherd!

I got them all in the pasture, and they were smiling–laughing even.  But as I closed the gate, it stuck.

And one sheep gave me a very knowing look, and bolted.  And all the other sheep followed this strong-willed old gal and they ran off down the road.  I had to knock on the farmer’s door after all.  The old man said, “Oh, yeah, they do that once in a while.” 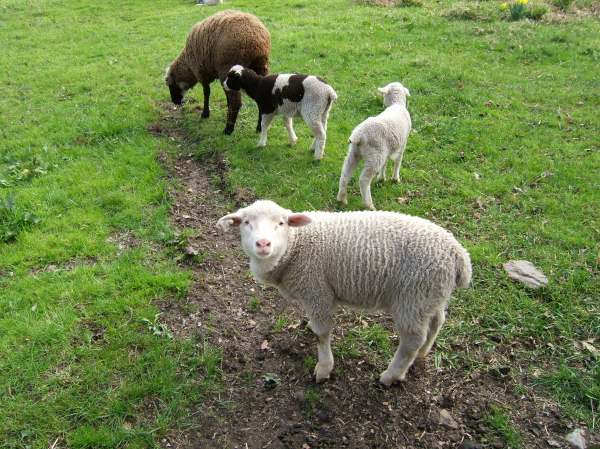