When I was in college, I entered a university-sponsored short story contest. My story was a variation on the old Aesop’s fable “The Grasshopper and The Ant.”

By the way, I can still recite several lines from the Jean De La Fontaine poetic version that I was required to recite in high school  – I can’t even imagine how human brains work, that I can say, “La cigale ayant chante… Tout l’ete… Se trouva fort depourvue… Quand la bise fut venue”…  forty-nine years after I stood up in French class with my little presentation. There must be a cubbyhole that stores useless shit so that it can come up at 3 AM.

But anyway… back to college – all the way forward to 45 years ago.

In my version of “The Grasshopper and The Ant,” when the grasshopper shows up at the ant’s house when winter comes, the ant welcomes him in. The ant says, “All through summer, I listened to your song while I was working, and your beautiful music made my toil so much easier. I’m so glad to be able to feed you this winter and repay you for the joy your song gave to me.”

And yeah, I was a bleeding-heart socialist know-it-all.

But you know, there is still a rather large part of me that still hopes the hard-working people have a little compassion for the daydreamers of the world.

Not everyone is ambitious. I know a few loving souls who do just enough work to get by, and then they play for most of their lives. They don’t mind living poor and they have fun and are good-hearted and generous with the little that they have. And they are good parents and sons and daughters. They don’t need advanced degrees. They aren’t workaholics.

Are they pulling their weight in the world? I guess it depends on how you define ‘weight.’

But I like these people. I’m glad they are in the world.

I think the world needs some grasshoppers. How boring if we are all ants.

Along with my benevolent if naive short story, there’s another Aesop’s fable that I take issue with:

The Fox and the Grapes. 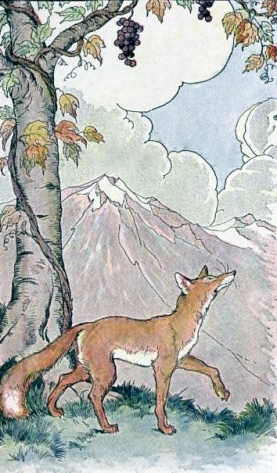 That’s where the fox wants some luscious looking grapes that are on a branch that is just out of reach. He leaps for them but misses. As he gives up, he says, “Well, those grapes are not ripe anyway. I wouldn’t want sour grapes.”

So he rationalizes away his failure by deciding he didn’t want them anyway.

But the thing for me is….  what’s so bad about that?

Sometimes it’s not such a terrible thing to cut yourself a little slack. To save your pride once in a while with a self-indulgent excuse.

Of course, there are occasions when you shouldn’t play the sour grapes line. When it hurts someone else. For instance, if a co-worker gets the promotion that you wanted, it’s just not right to say, “Well, that’s a lousy job anyway.” No, it’s the time to say, “Good for you.” And suck it up.

However, it would be different if you apply for a job at a different company where you don’t even know who the other contenders are. And you don’t get the job.  Well, it may be mature and honest to say, “Gee, I really wanted that job and I’m so disappointed.” But it may be a little ego-saving to say, “Well, it would have been a terrible commute and the guy who would have been my boss seemed like kind of a jerk anyway.”

There are lots of good excuses that can help you get through discouraging moments.

“Going to the community college instead of Harvard will save me a ton of money.”

“My apartment is tiny, but it’s easy to clean.”

“This healthy salad is more delicious than a slice a pizza.”

And sometimes even for very big stuff:

“I’d rather be an aunt than a mother, because I can enjoy the kids but give them back and appreciate the peace and quiet.”

If you are one of those people who’ve uttered the last sentence, I understand.  Some days you even mean it.

Some days I even mean it.