That instrument of scientific, well-documented information dissemination – the internet – tells me that Grapefruit is making a comeback.

So I have been spared.

But you know what I wish would also make a comeback? 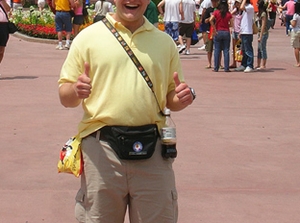 Do you know how much shit I have to carry with me when I take my dog Theo for a walk?

Our walks are  usually about 1.5 miles.  I live on a private road, so about half of the 1.5 miles is on our own property. But that leaves .75 miles in public. Sure, it may be on a road that never sees a car… but it could. A car could go by someday. And I’d be a lady with a fanny pack. I want to be a lady with a really cute dog. But the fanny pack would win out. That’s how I would be remembered.

Yesterday, this is what I had in my pockets on our walk:

Kleenex –  3 tissues.  It’s very cold right now in Connecticut. My nose runs. I do not understand how you don’t see a lot more runny noses in wintertime movies. Did Julie Christie’s nose drip in Dr. Zhivago? Did Andie MacDowell wipe off liquid snot in Groundhog Day? No siree. They looked sexy and gorgeous out in the zero weather. My nose runs like the kitchen faucet in my first apartment.

Julie Christie in Dr.Zhivago.  Why is her nose not dripping?

Pepper spray. As I said, I live on a private road. In the woods. There are bears. We had bears in our backyard just this Spring. We had a baby bear come up on our patio and press his little nose up against our patio door. Animal Control shot a bear in our brush pile two months ago. I need pepper spray for protection against the bears. Did I mention that there are bears?

Breath spray. My little doggy does not always behave. But I can’t exactly calm him down with pepper spray. That would be a tad harsh. However, when he is really out of control, a shot of breath spray in the air gets his attention just enough to stop him from chasing the squirrels – and dragging me along with him through dense shrubbery and low hanging branches. One of those squirrels could be a bear.

Treats. Because Theo is not always horrible on the leash. Only most of the time. So when he happens to be good, I like to reward him right away. Someday he may make the connection.

Clicker. I have a clicker thingy that the puppy kindergarten teacher recommended. I am supposed to use it when Theo is good. My second-grade nun had a clicker. She used it mostly when we were bad. I can’t figure out the use of it, but I carry it anyway. Theo ignores it, but who knows? Someday he may act like a little angel because he wants to hear the clicker.

Garage Door Opener. I have to be able to get back in. Quickly. Bears.

Chapstick. As wet as my nose is, the same can’t be said for my lips. And even though I apply it right before I leave the house, I might need some more. And it’s small. It doesn’t take much room in my pocket. And I like one with a blush of color. I have to match my rosy red cheeks. And rosy red nose.

Gloves. Not only because it is friggin’ freezing, which it is. But also so I can take yucky shit out of Theo’s mouth. He likes to pick up stuff from the side of the road. Old Dunkin Donut cups are especially desirable if you are a 7-month old puppy. But also cigarette butts and deer poop. Once even a dead mouse.

By the way, if you use a clicker when you are wearing gloves, it doesn’t make much of a sound. I am hoping maybe it makes a sound that only dogs can hear. But I keep taking my gloves on and off to use the clicker – and to wipe my nose – and the gloves going in and out of my pocket are way too much temptation for a doggy to bear. (Not bear in the scary animal sense, this time.) So I need to keep taking them out of the puppy’s mouth too.

Poop bag. Theo is a home pooper. By that, I mean he likes to poop within 8 feet of our door. Which makes for an easy clean-up. It would be an even easier clean-up if he liked to poop in the woods… but… bears shit in the woods. So, let’s keep it near the house, okay? I keep the pooper-scooper at the ready. But what if? What if we get to the public part of the walk and he decides to go again? What if he craps on someone’s lawn? Well, right now it would be crapping on someone’s snow – but that would be even MORE visible. They could be looking out the window, and see this runny-nosed, chapped-lipped lady with bulging pockets and her dog shitting on their pristine snow. So I bring a poop bag. I bring two. You never know.

Phone. Because I could break my leg when Theo is dragging me into the bushes to chase a squirrel. And because I need the pedometer app to know when we have gone .75 miles so I can turn around. And because you never can tell when he is going to be just so dog-gone cute. 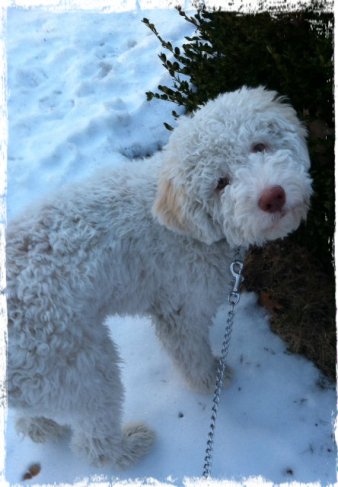 Toys. Because Theo likes to pick up random stuff on our walks, I like to be able to substitute a toy for a dead mouse. He is partial to The Cat In The Hat, which now has only one arm. But Theo is quite accepting of Cat In The Hat’s disability.

I am glad that Theo likes his handicapped toy. Because it reminds me of one of my all-time favorite dogs.

I was in college. I always liked a window seat in class. It made for better day-dreaming in Elements of English Phonetics. (Yeah, I took that. A snooze-fest.) So a window seat was required.

So one glorious afternoon, I’m gazing out the window. I’m watching a dog chase the falling autumn leaves. He’s happy. Running in circles and barking at leaves seems to be a very nice dog occupation. Along comes a guy on crutches, leg in a big white cast. The dog runs up, tail wagging, and grabs the end of one crutch. It seems another favorite past-time for this doggy is tug-of-war. He’s pulling and jumping, and the poor dude is trying to balance on one leg, and desperately trying to get the dog to let go of the crutch. It is great fun – for the dog. I thought I might have to run from the classroom (I wish) and rescue the guy. But finally another student comes along and pulls the dog away and holds him while the crutches guy makes a getaway. I’m smiling.

Four minutes later. Along comes a blind girl with a cane. I’m not kidding. And I’m thinking, Oh NO! And sure enough, here comes Doggy, tail a-wagging. He grabs the cane and pulls and tugs, and the poor blind girl is wrestling and appears to be hollering for help. And eventually a couple of kids run over and save her. Doggy finally – and happily – goes trotting off.

I’m laughing now, as I was laughing then. That dog just wanted to play, and he was one lucky dog. He found TWO people in a row with STICKS!

Theo with his beloved Cat In The Hat