My old cat is driving us crazy.

She was our neighbor’s cat. But our neighbor had some personal issues, and somehow her little kitten got lost in the shuffle. Cats are not like dogs. So often, dogs are loyal even to mean or neglectful owners. Cats are more like, “Oh you’re too busy for me? I’m outta here.”

Her name is Snickers. I’ve never liked that name. I liked Audrey. But she was already named, and even though she was more than ready to join our family, we only changed her last name. Snickers Roman.

Snickers was tiny. And she stayed tiny. At her biggest, she has never weighed much more than six pounds. But she has the attitude of a lion. Here she is on the roof of our garage – age twelve.

Snickers probably should have been named Snoopy. She loves roofs. And trees and ladders.

She loves people. She runs to the door when the doorbell rings. Our other two cats head in the opposite direction. Snickers also likes to visit. Before we moved, we had lots of neighbors. She liked to explore everyone’s house. One day our neighbor Lil heard noises in the attic. When her husband got home from work, she told him that a squirrel must have gotten in. He climbed up into the attic, saw a pair of big eyes, and said, “I think that’s the Roman’s cat.” And it was. Lil did not know how Snickers got into the house, never mind the attic.

Snickers hates dogs. And birds. And deer. And also cats. Yeah, she’s not much of a cat person. She’s a very bad sibling to her sister and brother. She hits first and asks questions later.

I adore her. She’s pretty and she’s fearless. That’s a combination I admire.

But she’s nearly eighteen now. Like lots of old ladies, she has gotten even smaller. She’s about five pounds. And it appears that her little body isn’t really absorbing nutrients very well any more. Because as tiny as she is, she’s starving all the time.

And she tells us about it. Loudly.

Snickers has a new habit. She screams. It’s impressive – the decibels that come out of her little body. It’s not a meow. It’s not even a lion’s roar. It’s a scream. A human scream. It’s ‘The Shining’ meets ‘Psycho’.

And when is Snickers hungriest?

This is not like a spoiled kid having a tantrum.

Wait,  I take that back.

This is exactly like a spoiled kid having a tantrum.

The difference is that she doesn’t tire herself out and give up.

No. She can scream an amazingly long time.

So we stumble out of bed and open a can and stumble back to bed. We take turns. My husband has more turns than me.

But I lay in bed several extra minutes, just wondering. Can I get up and pee quietly enough so I don’t wake Snickers? Will she start to scream? Will I have to maneuver the stairs in my sleepy state and open that smelly can? Isn’t it my husband’s turn?

We love our pets and our lives revolve around them.

But come on. Do I have to wet the bed because I’m afraid to wake the cat? 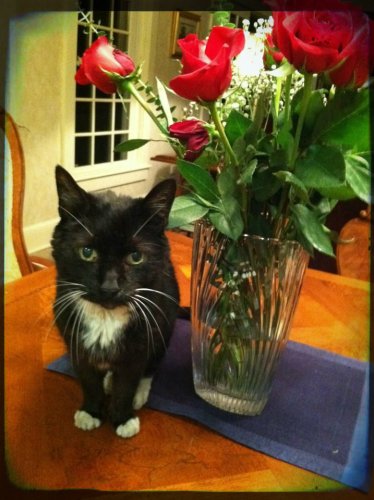 Snickers with the Valentine’s Day roses. Trying to look pathetic. It’s an act.

P.S.  You can still buy the Kindle edition of my “best-selling” (#5 in Humorous Literary Fiction for ONE WHOLE DAY!)  novel JUST WHAT I ALWAYS WANTED for only 99 cents (through Fri Mar 13)…  here’s the link!