Wanna Go For A Ride?

Last week I wrote about cats and dogs, and I guess it was obvious to most people that I am a bit biased towards cats.

It’s true enough. My husband and I have had a bunch of cats over the 25 years we’ve been together. As a matter of fact, I brought home a kitten for him after we had known each other just a few months. And the bunch of cats we’ve had have often been all at one time. For one brief period, we had five kitties running around here annoying each other.

My brother-in-law has two golden retrievers. Sophie and Stella are as sweet as dogs can be. (They are also as smelly as dogs can be – but I don’t hold that against them.) And my other brother-in-law just lost his best, most loyal friend, and I cried too when Woody died.

And my co-worker just took in a rescue dog – a happier dog you never saw. (or happier parents).

But my favorite dog of all time – and I don’t think anyone will ever beat him out – was my own dog, Sarge.

I personally think he was mostly shedder. I have never seen a dog leave so much hair behind. I brushed him daily and filled a shopping bag. And filled another the following day. A friend once remarked about how shiny Sarge’s coat was – gleaming black and snow white. I said his fur was that spotless because it was always all new. He grew a new coat every week and left the old one on the kitchen floor.

Sarge could catch thirty popcorn in a row. He wished it were 300, but the rest of the family needed some too.

He couldn’t tolerate any fighting in the house. And he wouldn’t let anyone touch me. As I was a teenager at the time, I did not necessarily appreciate his vigilance. But my Dad did. “Good Boy,” Dad said as Sarge growled at the boy who put his hand on my knee.

But that doesn’t mean Sarge was mean. Or brave. He was quite a baby, and used to go hide when the doorbell rang. My father would answer the door holding Sarge by the collar, telling the salesman, “I’m not sure I can hold him,” which always scared the salesmen away. But Dad meant he couldn’t hold Sarge much longer from running upstairs and hiding under the bed.

Sarge couldn’t bear to be yelled at. If you yelled at him, he threw up. And then you had the mess to clean up, in addition to whatever you were mad at him for in the first place. So we always had to watch what we said to the dog. “He’s sensitive,” explained my mother.

He had a good sense of humor though. He liked to bump your elbow while you were drinking something. He did that a thousand times. That joke never got old. (For Sarge.)

But he was a runner. That was his worst fault. Open the door and he was G-O-N-E! Luckily, the one thing he liked more than running free was riding in the car. So when Sarge escaped, you got in the car and drove it down the road a ways. Then you stopped the car and opened the door, and called, “Wanna go for a ride in the car, Honey?” And he’d jump in. We did that dressed in our gowns the day of my sister’s wedding.

One day many years later, I was working near home and out on an errand at lunchtime. As I drove through the neighborhood, I saw Sarge. He was strolling down the street. Oh no, I thought, he’s loose again. So I pulled to the curb, and popped open the passenger side door, and said – as coaxingly as I could – “Wanna go for a ride in the car, Honey?”

And there on the sidewalk, previously unseen by me, with a very surprised facial expression, was the mailman.

Sarge – you practical joker, you! 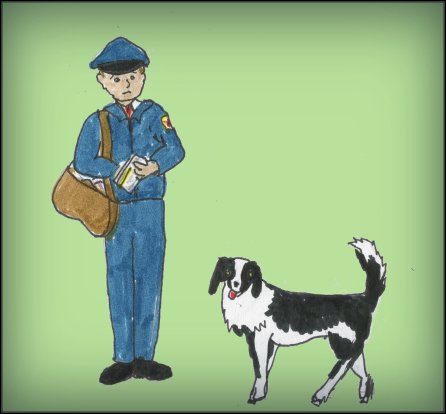