Just When You’re Ready To Strangle Them

A couple of nights ago, we were having dinner with some old friends. My husband has spent weeks under his classic car trying to get it ready for an upcoming show.  So Friend-Hubby volunteered to help.

“That would be friggin’ great!” said Hubby enthusiastically. (I thought for a moment he might cry.)

“I can come over any night this week. When do you want me?” asked Hubby-Friend.  (which is a synonym for Friend-Hubby – because I’m not sure which is the proper term)

(Which miraculously was correct…my husband never knows what day it is.  And let me digress further. One November, he asked me what day Thanksgiving was, and when I told him it was the 26th, he said, “No, I mean what day of the week” – and so I told him that this year Thanksgiving happened to fall on a Thursday, and he said – seriously – “Oh. Okay.”)

Let me start that sentence again:

“Let’s see…tomorrow is Wednesday,” (I’m repeating this for a reason) ” and I have to put the oil pan back on and switch out the tubes”  (okay, it wasn’t tubes, but I don’t know what the hell is was…), “and there’s the transistors”  (I didn’t take notes, all right?) “and the gaskets, and Thursday I’ll be ready for the duvet covers.  So maybe, Wednesday night.”

“Okay,” says Hubby-Friend, trying to follow (whereas I had completely given up).  So tomorrow night.”

And Hubby said. “I don’t know. What day is tomorrow?”

When we got home, I heard that distinctive chirp that drives me crazy but that my husband has never heard in his entire life.

“Uh-oh,” I said. “I think we need a new battery in the smoke detector in the den.”

“It’s the room off the kitchen. The one with the TV and the bookcases and the leather furniture.” I admit this explanation may not have been in my inside voice.

“What do YOU call that room?” I asked.

“The room with the TV” he answered.

You may not believe these conversations happened. But I SWEAR.  And the same evening, no less.

But here’s what he said the following day when I got home from work.

“Guess what I did today,” he said. “I went to the radio station. The door was locked and there was a sign that said ‘No Soliciting’ – but I banged on the door anyway. And  when someone finally opened the door, I explained that I had a story they should cover. I said that they needed to interview my wife. That my wife was an English major in college and she was a really good writer and even won some awards in school. But after college she got a job and the company helped pay for an MBA, and so she gave up writing and worked for her whole life in Finance. But a few years ago, she realized how much she missed writing and so she spent two years writing a novel while still working full-time. And now she’s published her book and it’s really good. She did it – and she’s a good example for anyone who thinks it’s too late or that their dreams are impossible. And so you need to tell her story.”

Did that make the radio station want to tell that story?

But it did make me want to stay married. At least for a few more days. 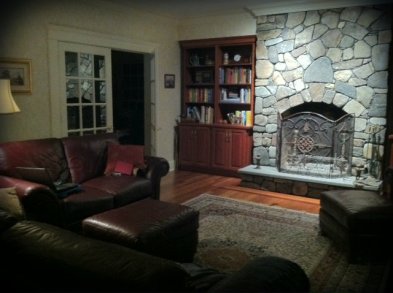 The Room With The TV