In the summer of 1969 – the summer between high school and college – there occurred an event so enormous it changed my life forever.

I know what you are thinking – Apollo 11 – the moon landing! The triumph of science and exploration!

In fact, I was so oblivious, I didn’t even know it had occurred until after it was over.

But that doesn’t mean that it wasn’t a turning point in my life.

Once somebody more “with-it” clued me in (which was basically everyone in the whole world, including my Mom and Dad), I embraced the Woodstock Nation with my whole heart and soul.

I embraced Richie Havens and Joe Cocker.  And Crosby, Stills and Nash (…but not “and Young’ yet…that came later… but then he became my new favorite…mostly because I had a boyfriend who looked like him, and I could tell myself that my boyfriend was not incredibly homely… he just looked like Neil Young…)

I became a full-fledged hippie.

I became a hippie in the “dress like a hippie” sense.

How I loved the clothes!

I had bell bottoms where I cut the seams from the knee down and added more material (in a contrasting fabric) to make them really wide.  And I had long flowing tunics. I had altered a pattern by adding extra material to in the sleeves…. (yes, I added extra to everything – and I could get away with it, since I still weighed 96 lbs).  I could buy one yard of material and two hours later I had a new flowy top.

Oh yeah, my favorite headband was a studded leather headband that had long braided tails down the back.  Which was as close as I could get to long hair. Although I had long longed for long (I think that is actually grammatically correct) hair parted down the middle, and had every intention all my life to grow my hair out, I didn’t actually have the patience for the growing out part. So I just permed it like crazy, and went with the afro-hippie style. And I had an African boyfriend for a very short time who showed me how to make my ‘do’ really big.

And I was perfectly attired to do so.

Except for one thing.

The Woodstock Generation didn’t really care that I had a good Woodstock costume. It turns out I had the perfect clothes for people who didn’t care about clothes.

A girl in my dorm wore her father’s pajama top, and she was welcome at The Hippie Popular Table.

I wrote decent poetry, and I marched in anti-war protests, so I was closer to fitting in than my sweet but pathetic high-school self.

But I was still a nervous, shy little girl with a shitload of brains and not an ounce of charisma.

So I watched The Popular Table from my own table of sweet smart misfits. 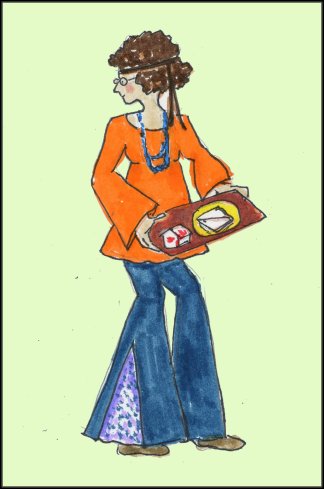 (I wish I had a photo of my Hippie self. For some strange reason, it appears that no photos exist. I asked my mother why. It seems that my parents were waiting me out.)