Last year, I wrote that I am among the most patient people in the world. (Just You Wait)

I love traffic jams and long lines at the grocery store.  For me, waiting is permission to be lazy. The plane is late?  Great. I have an excuse to do nothing. It’s not my fault.

But I realized recently that I’m not always patient (and not  just when I have to pee and the traffic isn’t moving).

Last week during dinner with my Mom (Subway this time – she’s such a cheap date), I was using my iPhone to show Mom the latest Facebook pictures of her great-grandchildren.  It was slow going.

“Cripe,” I said – as I never swear in front of my mother – “Facebook takes forever to load.”

But driving home, as I was saying the real swear words I had stifled – (I believe you have to let them out so you don’t explode) – I realized how crazy it is to think that my iPhone was slow.

When I was a little girl,  photography was expensive.  And VERY slow.

You saved up to buy a film. Mostly, you could only afford a 12-exposure film. A film that allowed for 24 shots was cheaper by the print, but  you often couldn’t come up with that kind of up-front cash. And black-and-white of course.  Only a special event called for the expense of color film and color processing.

And you hoarded those 12 pictures.  No taking pictures of nothing.  An “Occasion” only. Which was really a pretty good idea when you think about it. I am not really that interested in what my Facebook friends are having for dinner. (not that I haven’t done that myself of course… but my meals are fascinating….right?)

You’d load that film, carefully threading the beginning of the film through the little sprockets – in the dark of course.  If you missed a sprocket, the film would pop off, and you couldn’t advance the film, and you’d go back to your darkened room to see if you could fix it, which you usually could not.

And you’d wait for a family event and line everyone up, and take ONE picture.  Maybe two, just in case. 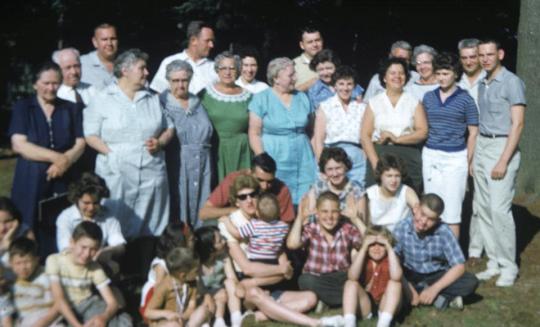 Graduation party, 1961. Trying to fit everyone in one shot, and not quite succeeding. I am in the front,distracted by my silly cousins, with a red headband. (And how about the bosoms on those ladies?  Shouldn’t I have inherited some of those genes?)

And using a flash on an indoor shot was even more expensive. And 78% of the time, the flash didn’t work. So you wound the camera back (yeah, you wound the film), and shot over the flash-flop picture , because you didn’t want to waste the frame. What you got was usually a weird surprise. No wonder people believe that ghosts appear in old photos.

Once you took all twelve shots – you usually took thirteen, because something you could squeeze in one more, and you wouldn’t want to waste that, although usually that meant you got half a picture – a few months had often passed by, because you were so stingy about taking out the camera. Sometimes you couldn’t even remember what was on the roll, so much time had gone by.

So you went into your dimly lit room, and carefully took the film off its little sprockets  and wrapped it really tight, and put it in a light-proof box.  And you brought it to the drugstore.

And waited for a week.

(Yeah, Facebook photos on your iPhone are SO SLOW.)

Our local drugstore would kindly only charge you for the prints that came out.  But their interpretation of “came out” was very liberal. Your thumb over the lens was still a good picture – of your thumb.  And headless people (which my mother was famous for) still had bodies, didn’t they?

Out of 12 (and a half) pictures, you were lucky if you had three shots where everyone had his eyes open.

And you had no way of knowing ahead of time. You’d open your Kodak envelope right in the drugstore – (yeah, that’s what soda fountains were for) – only to see two headless shots, one thumb shot, four “squinties” (you posed people FACING the sun), three total blinks, one with your brother looking especially dorky, one of your foot, and one half of a shot that would have been perfect – had you not run out of film.

And you kept them all. No delete button.  You put the good ones in an album and the bad ones in a box.  You had a very full box of headless, blinking relatives. And thumbs.

And you kept the negatives too. Envelopes of negatives – none of them labeled.

Today we have lost the value of photography.  We can take 60 shots and toss 59 and just keep the one that looks good. (I do that, of course…just look at my profile picture.)

Old family photos are precious. Expensive and unique, impossible to recreate. There was no going back to that one moment to see if you could get a better shot.  A picture was one second in time, closed eyes and all,  and all the more sweet because of it. 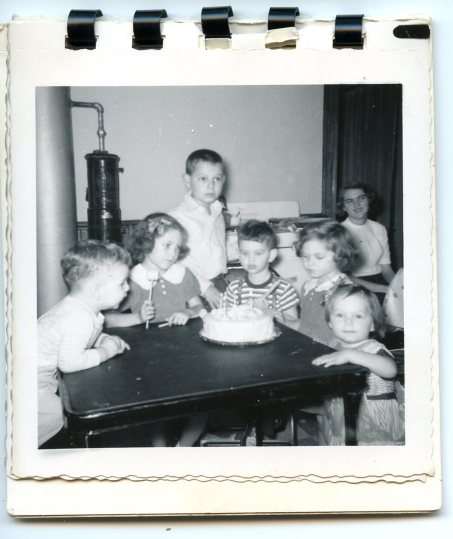 Birthday Party, 1953. I’m the little one in the front, wearing what appears to be a full-length plastic bib, watching the camera, not the cake.