By now I am sure you are wondering:

How in the world did Nancy acquire her unerring fashion sense?

Well, I don’t want to discourage you if you aspire to my ‘chic-ness’  – but the truth is:

I was born this way.

Why, I remember lying in my crib, watching my sweet old auntie (whose name I will not mention, as I wouldn’t ever want to hurt her feelings, even in heaven), and thinking to myself, “As soon as I can say more than ‘bye-bye’, I am going to tactfully bring up non-clumping mascara.”

My parents had one of the first TVs in the neighborhood,  and there was nothing like Television to sharpen my fashion perception.

Even as I toddler, I was watching Big Three Theater – a late afternoon show which televised old Shirley Temple movies almost exclusively. And I loved Shirley. But I knew that it was gauche to wear your dress so short that everyone could see your underpants. How her mother let her make movies that way, I will never know. 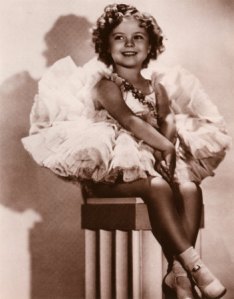 One of the shows I watched as a really little kid was “Adventures of Superman.” I may have been six, but I often shouted at the snowy blurry, rolling image of Lois:  “Your suit (or hat) (or earrings) (or lipstick) (or hairdo)  is hideous!”

I became even more discriminating by age nine.  I had a special dislike for bad wigs.  Watching “Bonanza” often infuriated me. Little Joe’s girlfriend – who you knew would die at the end of the episode – would be riding her horse, with the wind whipping through her hair, and I could see where her fake long hair was attached to her short hair. Sometimes the color of the fake hair didn’t even match her real hair – which is really saying something with a black-and-white TV.  “Get a better wig!” I’d sneer every Sunday night. (and a boyfriend who wasn’t fatal….)

As I got a little older, Elly May Clampett ignited my indignation. I may have been eleven years old, but I knew that pigtails didn’t make you seventeen when you were really 30. And even if I were raised in the backwoods, I figured it would take me about two hours to stop calling it the “Cee-ment pond”, and a week tops to get rid of the twine I was using for a belt.

(… which, by the way, reminds me again of my sweet father, and his favorite parody (copied from Roger Miller) of Johnny Cash’s “I Walk The Line”:  ‘I keep my pants up with a piece of twine… ‘)

When I was twelve came The Patty Duke Show. As someone who had been dying for three years already to be a teenager, I was tremendously disappointed in Patty’s style sense.  Cousin Cathy was supposed to be a fashion failure. But Patty was supposed to be cool. Cool? Is that was Hollywood thought teenagers dressed like? It was as if they hired the nuns from my school to be the costume consultants.

(…Oh, and another by-the-way…. why would Ginger wear an evening gown on a three-hour cruise?)

Thank God  for 1965. I was fourteen, and I saw them –  my style icons. The Ed Sullivan Show. September 1965. It’s when I KNEW I was right all along. That Style is individual. It’s quirky. It comes from within. And you either have it or you don’t.