How Funky Winkerbean Changed My Life

First, let me assure you that not all of my Life Philosophies are derived from the Sunday comics.

That being said, I admit that Funky Winkerbean changed my life.

Do you remember hapless Les back in the 70s?  (By the way, I’ve never really understood the word ‘hapless’–why does poor Les have no hap?)

Anyway, back in the high school days of the comic strip, Les asked one of the plainer girls for a date. She was very surprised he asked her, and she said so. He explained that he hadn’t had any luck asking out the popular girls and so decided that he should lower his standards.

While this didn’t exactly win over the girl, it won me over.

I’ve been setting my goals pretty low ever since.  It works so much better than failure.

This is why I was able to return the beginner’s Yoga class, despite my considerable ego. For a couple of weeks I tried to graduate to the advanced class, but then I reminded myself that my goal was never to touch my feet to the back of my head in Bow. My goal was to be able to get up off the floor after Corpse.

Do I need a higher goal after ten years of Yoga?  Maybe. Aspiration is a good thing. So I have decided that this year, my goal will be to stand on one foot. If I can stand on one foot, I can do Tree. I can do Eagle, Crane, and Warrior III. That will be good.  That it will have taken me eleven years to stand on one foot just goes to show you how patient I am. Which is an admirable Yoga goal.

The risk of low ambitions is that you still might not exactly achieve them, and that could be a little embarrassing.

I was reminded of this a few days ago, during lunch with some friends.

One of my friends is an avid music fan, and he was speaking of Keith Richards’ autobiography. According to Richards, Marianne Faithfull was so crazy that Mick Jagger finally had to call it quits.  Just think about that.  How sane are you if you are not sane enough for The Rolling Stones?

And here is the clincher – the epitome of underachieving:  Two of my lunch-mates were reminiscing about their high school buddies. One of their friends back then had always wanted to become a clown. And she had applied to Clown College. But she had not been accepted. 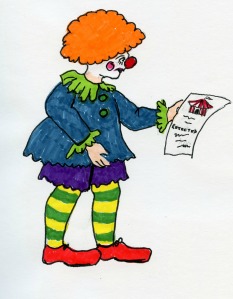