A few days a go I was doing a little gardening.

Here is a totally gratuitous photo of my helper. Theo has nothing to do with this story, but I am addicted to taking pictures of his adorable self.

So anyway, I am digging up weeds. I love pulling weeds – it is sort of a free association task for me. Sitting on the ground with the sun on my shoulders doing something so mindless – it allows my brain to travel to all sorts of interesting orbits.

I have new gardening gloves. I suffer from a severe allergy to poison ivy. My reaction is truly terrible, so my dermatologist told me to buy very cheap gloves and use them as disposable, since my gloves may come in contact with the satanic plants. But the problem is that I poke through the fingers of cheap gloves immediately. So this year I sprung for a really nice pair. I love them.

So in my wandering thoughts I returned to the dirt of my childhood.

As much as I hate getting dirt under my fingernails now (hence the better gloves), I hated it even more as a kid. I despised that gritty feeling – even though I loved playing in the dirt. My mother did not garden. She had four kids and a job. Tending flowers was WAY down on her list. So I didn’t even know there was such a thing as gardening gloves. However, I invented a pair.

What I mean is that I took my white Sunday gloves and put them on, grabbed a good soup-spoon from the kitchen drawer and went out to dig. Mom did not think this to be a creative solution.

So I learned to scrub my fingers with an old toothbrush, and get used to a little dirt.

I see the sandboxes that kids have today. So pristine. Hygienic, sterilized sand. Sand you buy.

We didn’t have a sandbox. We had DIRT.

We had a little pit in the center of our backyard where no grass grew. My oldest sister thinks the bare spot was the result of a car up on blocks in that spot for a long while. I don’t remember that. I just remember that is was a nice convenient spot for digging.

But our digging ambitions grew larger than our little circle.

It was the end of the summer of 1960. For the first time, the Summer Olympics were televised. There was no such thing as satellite TV back then. No siree. Videotapes were sent from Rome to Paris to New York. And yet through this primitive, mostly manual technology, we still saw some events the same day they occurred. It was like a miracle.

These were the Rome Olympics that saw the likes of Cassius Clay (our beloved Muhammad Ali), Rafer Johnson, and Wilma Rudolph. I was mesmerized.

Through all this wonder, there was one event that captured the hearts of me and my cousins.

John and Arthur were brothers. They lived downstairs in our three-family home. Their mother was my father’s sister. My family lived on the second floor, and my grandmother lived in a little apartment on the third floor. If you are thinking this is a spectacularly nice way to grow up — you are right. People may refer to this as an “extended family.” But we weren’t extended at all. We were together.

Arthur was my age – nine in 1960. John was a year older. They were rough-and-tumble boys. I was a feminine skinny little girl. Every time we played together, I ended up with some minor injury. But that didn’t stop us. My mom just stocked up on Mercurochrome and Band-aids.

The event that so inspired John and Arthur and me on the grainy shadowing black-and-white TV was:

Also called the long jump, we watched men and woman hurling themselves down a stretch of runway, launching themselves spectacularly airborne – to land impossibly far away into the soft earth. The men jumped more than 25 feet. The women almost 20.

We needed a long flat surface to gather speed. That would be our driveway. And at the far end of the driveway was a patch of yard not much used. It was sort of our secondary dirt hole. We often played with toy trucks in that stretch. There was not much grass. After that year, there was no grass.

We took shovels and rakes and loosened about 15 feet of earth. It took days on end. School began and so we worked after school. We built ourselves a landing pit.

And we jumped. We ran down that driveway and threw ourselves into the air. If there were cars in the driveway, we ran down the edge. We had no measuring tape. We used a couple of sticks to mark our best efforts.

We jumped and jumped. The following summer, we did it again.

It was exhilarating. It was euphoric. It was flying.

I remember my mother laughing as I got into the tub every night for my bath. I was solid dirt from my ankles to thighs. The outline of my socks was the dirt demarcation.

I don’t remember too much fall-out from digging up the yard. I only remember joy.

And I learned some good things during those summers of jumping:

* Dirt doesn’t hurt. It feels good and soft and it smells good.

* You don’t have to compete with people who are better than you. There will always be someone bigger and stronger. You can be glad for them, like I was glad when Johnny could move his stick to a new personal record. Work for your own personal best.

* You just have to be just a little bit better than you were before. Inches count. Small improvements each time yield big results after a while.

* Fun doesn’t have to cost anything. 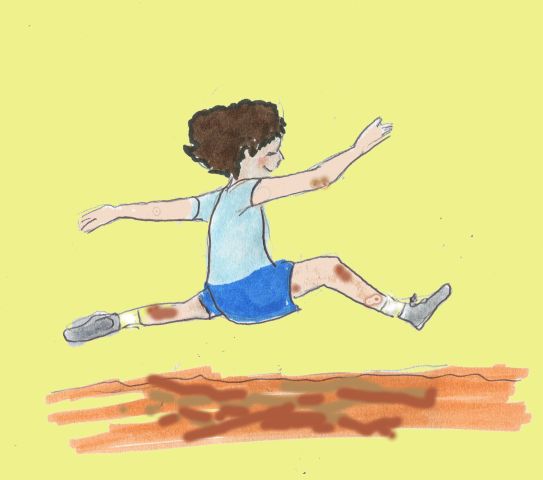