I was doing my hair the other day when my curling iron broke.  Even though I wear my hair straight, I use one of those big-barreled curling irons to give me some body. And to get all my hair going in basically one direction. I have cowlicks. Year ago, in my college Art class, we were drawing the human figure, and the teacher described drawing hair like this:

Sometimes hair is a solid silky sheet and it reflects the light. Curly hair lets the light through it. And then you have hair like Nancy’s where every single strand has its own direction.

So I was bending my hair into submission, and the curling iron gave up. This has happened about once a year for the past twelve years.

The clamp that clamps won’t clamp. The hinge has become unhinged.

My husband got so aggravated at this recurring aggravation that one year, he took the broken curling iron down to his workshop and devised a new clamp. But the fix was temporary.

That’s because the damn thing is designed to break.

If you are manufacturing small appliances that you sell for $19.95, you don’t want the junk to last forever. You wouldn’t make any money if unruly-haired girls bought your stuff only once. You want it to last just long enough so that unruly-haired girls won’t demand a refund, but instead will just go out an buy another. Like every year.

I won’t say the name of the manufacturer, but you know the one. They make tons of cheap hair appliances, and they have the same name as a movie about a hijacked airplane. Coincidence?

I think that just about everything these days is designed with Planned Obsolescence. My dog’s toys last 3 weeks if we are lucky. But sometimes only five minutes.  We once bought a cat toy that the cat destroyed 45 seconds after it came out of the box. I think that was a record. But knowing cats… perhaps not.

We bought a flat screen TV a few years ago. The screen went black one night, although there was still sound. We decided it would be worth calling a repairman. It cost $375 for a new mother board. The board was guaranteed for 90 days. It failed on day 94.

It was a miracle we could even locate a repairman. I’m not sure there is a single shoemaker in all of Connecticut. Shoe repair? Who does that?

And there are bobby pins whose rubber tips come off. And eyeshadow that breaks into flaky chunks and falls into the wet sink. Lipsticks whose tops come loose in your purse and the lipstick gets coated with kleenex dust. Pens that won’t write. Aerosol cans that won’t spray. Towels that fray in the washing machine. Buttons that fall off your coat.

And baking dishes that are no longer safe to bake in. And yes, you know the brand this time too (because it’s THE Brand). The formula was changed a few years ago, so unless you have an old baking dish, you can end up with this: 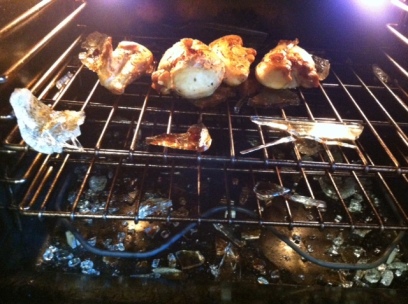 This had been chicken. It’s happened to me twice. Do not buy new tempered-glass baking dishes. Buy your dishes only at yard sales. Old persons’ yard sales.

I think all this “Let’s make shit you have to replace often” philosophy started in the sixties.

Because I remember snagging yet another nylon stocking on the school desk in science class in 1966. I expressed dismay (without swearing, because that would get me suspended) – and the teacher said:

“Did you know that nylon stockings can be made to be run-proof?” He added, “But then how many would you buy?”
“Do you think,” I asked, “that the hosiery manufacturers pay the school desk manufacturers to add a few rough edges?”
“What makes you think they are different manufacturers?” he replied.

So I date the rise of Planned Obsolescence to the 1960s.

Cuba’s revolution in 1959 eliminated that country’s ability to buy new cars. So they are still driving big old Buicks and Chevys from the 50s. 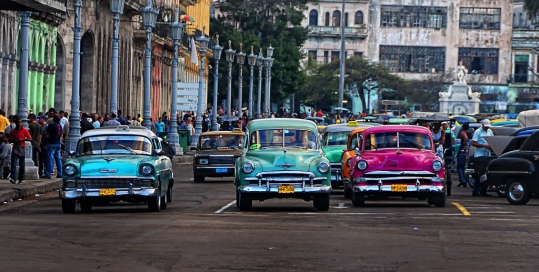 Yeah, these cars are still on the road. They are not living the pampered life of antique car shows. They go to work. They get groceries. They are taxicabs.

I want to go to Cuba and see these magnificent displays of automotive longevity. And I want to go there soon. Because, with the normalization of U.S./Cuba relations, it won’t be too long before the Cuban people are all driving unreliable pieces of shit.