Look On The Bright Side

Don’t you just love it when someone you think is pretty smart makes an observation that matches exactly an opinion that you happen to have?  I so enjoy that validation.

This week I was reading the latest post by Jenny Lawson, The Bloggess. (If you haven’t read The Bloggess, and if your taste runs to humor that is weird, wacky, and often in terrible taste – like mine does – you may want to check her out.) This week, Jenny recounted her bout with food poisoning, which was really terrible, except for the satisfactory side effect of having lost a couple of pounds.

I have always looked at the bright side of serious illness. At least you lose weight.

Which reminded me, in a weird wacky and tasteless way that would make the Bloggess proud, of a coworker from many years ago. I’ll call her Barb. Which is an appropriate thing to call her since that was her name. Barb was born with a birth defect and only had one arm. She wore a prosthesis. One day over lunch she told me with a laugh that her artificial arm was an extremely effective weapon. And on top of that, she took it off when she weighed herself.

Well, I was impressed. Not by the usual  “positive attitude of the poor handicapped person” – but by the very convenience of having a built-in weapon. She actually had me a bit envious of her prosthesis. I wished I could take off a piece of myself before I stepped on the scale.

Yes, illness has its benefits. And not just the fact that people feel bad for you and take care of you – even though that is really really nice.

For instance, I have long had the idea that one advantage to being in a coma for a while is that you could grow out your hair without having to put up with that awkward in-between stage.

A stretch in prison could have the same effect.  (And to my male readers – all 3 of you – think of all those prison movies where the inmates are always working out. Think how buff you could be with some time in the slammer.)

And speaking of crime – many years ago my purse was stolen. It was a real pain in the ass. I was scheduled for a business trip in just two days, and so I had to replace my driver’s license and credit card in one day. But there was a silver lining in that aggravating cloud. For the next several months, every time I couldn’t find something, instead of tearing the house apart in frustration, I just figured that the missing item must have been in the stolen purse. I saved about a zillion hours searching for shit.

Breaking stuff can turn out okay too. Once I dropped the lasagna just as I was taking it out of the oven. I cried so hard my husband not only picked up the glass-and-marinara mess, he took me out to dinner. Not so bad.

Of course, it’s a tricky balancing act to enjoy the bad stuff when it comes to husbands.

Do you remember the 1990 movie “Crazy People”? Dudley Moore is an ad executive, who has a nervous breakdown and starts to write honest ads. He ends up in a mental hospital and all the other insane patients team up to help write ad copy.

One of my favorite ads was this: 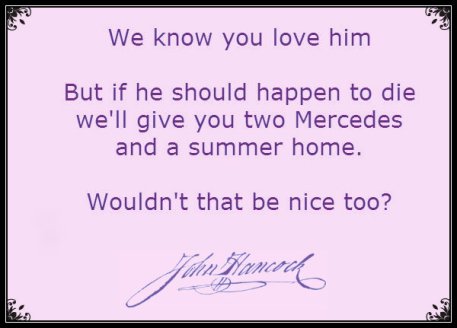 Not long after we got married, my husband was leaving on a business trip.

As he was packing his suitcase, he said, “Just so you know, I bought the extra traveler’s insurance. I have a $250,000 policy if I should die in a plane crash.”

Well, my husband had not seen that movie.

It was quite a long time before he spoke to me again.