Several years ago when I first joined Facebook  (maybe the word ‘joined’ isn’t quite right – how about ‘was sucked into’?), I thought that I was supposed to post interesting ideas and clever, intriguing thoughts. I didn’t know that all you had to do was post a iPhone photo of your dinner.

But life is so much easier now that I know. Sometimes I even post an iPhone photo of myself eating dinner.

Yes, Facebook is a piece of cake. (or souffle in the above case.)

But I was looking back to my early, earnest days, and I found a list I had drawn up.

Everyone has them. Stuff you secretly love, but your impeccable good taste makes you ashamed to admit to.

Here’s my list (slightly updated where I have new embarrassing affections):

1. Movie:  “French Kiss” – corny and implausible, but oh, the setting. And I love the terrible casting of Kevin Kline as a charming French thief. He certainly charmed me.

And let’s add some runners-up here too: “Pretty Woman” (because I believe in Cinderfuckinrella)  and “Against All Odds” (because Jeff Bridges looked like this) 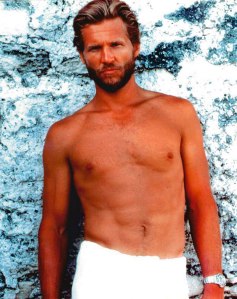 2. TV Show:  Back then, I said “Dancing With The Stars.” But I’ve rather lost interest lately. Well, to be honest, it’s because we really don’t watch anymore; my husband is boycotting, since the firing of Brooke Burke, who he would marry in a split second, if he wasn’t already married to a spectacular person (but he’d think about it). So now, I would have to choose “Say Yes To The Dress.” Where else can you see a bride-to-be try on a skintight strapless sequined mermaid gown in blush pink that reveals her many tattoos, while her mother says, “You look so classy!”?

3. Book: Yes, I am now reading the Pulitzer Prize winning, “The Goldfinch,” but in all the past ten years, the book that I read without stopping for things like eating and sleeping was “The Da Vinci Code.” I admit it.

4. Food: Hot Dogs. Horrible food; horrible for you. Always loved them; always will.

5. Snack:  Potato Chips. Not only do they go with hot dogs. They go with everything. But I don’t buy potato chips anymore. Because I can eat the jumbo sized bag all by myself. But my mother buys me chips, and I eat them at her house. She obviously loves me.

6. Money Waster: Drug store makeup. Sure, I have expensive makeup and imported face creams. My favorite lipstick cost $24 a pop at Sephora. But that doesn’t stop me from trying NYC lipstick off the rack at Walgreens for $2.99. Every week. My bathroom cabinet looks like this:

7. Time Waster.  My original guilty pleasure was online Mah Jongg. But I’ve come so far. I’ve been through Candy Crush and Pet Rescue, and still managed to write a novel. How I don’t know. Well, actually I do know. I hadn’t yet discovered La Belle Lucie. Or Polyvore. Or Pinterest. Or Twitter.

8. Song: What makes me smile when it comes on the radio? “Sugar Sugar” by the Archies. It’s not even a real band, for God’s sake; it’s a cartoon, for crying out loud. and I love it. 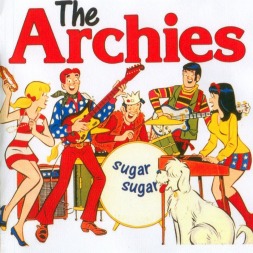