I don’t really have a bucket list.  Although I have written about NOT having one.

But of course, there are things that have been floating around in my brain that I know I’d like to do someday.  And also of course, I’d like to do them before I die, since I think it would be hard to do some of them after I die. Although perhaps getting my novel published might be easier when I’m dead.

I’d like to see the Grand Canyon. My husband has been there. He knows I’d like to go too because I might have mentioned it a few (hundred) times. He has no objections to going again. But he’d like to drive out there.  From Connecticut. In a camper. A camper is NOT on my list of things I’d like to experience. Maybe he could drive out and meet me. I’ll be staying at a bed-and-breakfast.

And I’d like to see “Carmen” and “Madame Butterfly.”  My husband accompanied me to the opera once – to see “Tosca.”  And he liked it. If I remember correctly, he said, “I’m really glad I got to experience that. I don’t care to experience it again.”  So any future opera excursions will have to be with a girlfriend. It’s for the best.

I’d like to meet a movie star. Not just “How do you do?” as I said to Helen Hayes back in the 70s. I’d like to sit down and have a conversation with someone super famous – the kind of person that everyone else just turns around and stares at. I don’t want it to be an idiot though, so it has to be someone SMART and famous. So that probably really limits my choices. I’m leaning towards Steve Martin for some reason. I think he would be fun to talk to. I wouldn’t object to Ralph Fiennes. I have no idea if he is smart but I’d make an exception in this case.

One other thing I’d like is to have a perfume designed just for me. It would suit me so perfectly that it would make people smile when they walked by me. And I’d feel serene all the time. You could make a left hand turn from the right hand lane directly in front of me and I wouldn’t even mind. I could read sentences with  “your welcome” and “back in its’ own place”   and “I win, you loose” and my head wouldn’t even explode.

A few evenings ago my husband and I were driving through town, and I was enjoying the Christmas decorations in all the yards. I don’t like big bouncy blow-up things – and they always seem to be half-deflated and vaguely reminiscent of used condoms. But I like lights, especially little white lights. I’m confused though by the proliferation of lighted deer. They are kind of pretty, but I’m not sure what they signify. I mentioned this to my husband, and he said he thought they were reindeer. Which makes more sense, but to me they look more like Bambi than Blitzen. And I remarked that it would seem more Christmas-y if they were camels.

And I started to think about camels. And I realized something.

“You know what I would really like?” I said to Hubby.

To go to the Grand Canyon?” he guessed.

“Yeah, that too. But I would really like to ride a camel.”

“Is this some long-standing desire you’ve had since you were a little girl?” he asked.

“No. It just popped into my head. But now I really want to do it. I want to ride a camel.”

I smell too good. 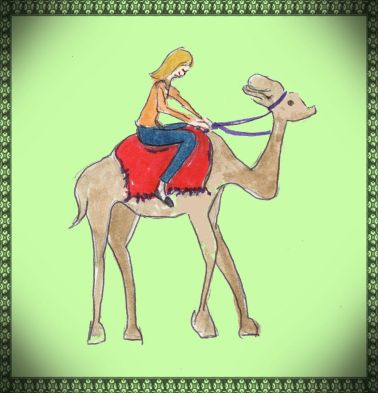