The day after the wedding I attended in St. Lucia, we were literally knee-deep in mud (at the volcano) when the bride started a sentence with “My husband….”  She stopped mid-sentence and said, “That sounds weird.”

If she thought it was weird in her mid-twenties, think about how weird it was for me – marrying as I did at forty. (almost forty-one, but let’s keep it at forty.)  I had never thought those words – “My Husband” –  would ever be part of my vocabulary.

After the initial weirdness, I liked the way it sounded. “My husband.” Yeah, I thought, I got one of those.  I sprinkled it liberally in all my conversations.

It felt a little like I had joined some popular club. It certainly wasn’t a very exclusive club, but one that I thought would never have me for a member. And I had been all right with that notion (staying out of the club) for a very long time. In fact the longer I had been single, the more I appreciated the freedom of it.

But when I joined the Married Ladies Club, and got to say stuff like “My Husband” and “My In-Laws,” I found I enjoyed being in that sorority quite a bit. I especially liked saying “My husband’s job” – by which I meant: taking out the trash, shoveling snow, and killing bugs.

Yes, “My Husband” felt very pleasurable making the trip across my lips.

After several years, I found that the phrase “My husband” was gradually being accompanied by something else. Usually an eye-roll. You know the context: “My husband ate the cake I made for the party.” “My husband bought me pot-holders for my birthday.” “My husband forgot to pick me up.”

This use of “My Husband” is also a part of a club. It is the Married Ladies Exasperated Club. It is also not exclusive. You can join as soon as the honeymoon is over. The membership fee is high. But we all pay it. It has a very strong support group, called “Oh yeah, I’ve been there.”

Before I joined either of the “My Husband’ clubs, I had, on a very occasional basis, used the term “My Boyfriend.” This always sounded presumptuous to me. I was never quite sure he (any he – of which there were multiple but short-term) considered himself “My Boyfriend.” “My Lover” was even worse. I’m not very superstitious, but I was certain if I ever used that term, it was sure to reveal itself immediately as untrue.

But “My Husband” was not as equivocal as Boyfriend or Lover. That is what he was – BY LEGAL DECREE. I wasn’t jinxing myself by calling him such.

And last week, when I watched My Husband haggle with the jet-ski dude, I refrained from the old familiar eye-roll (though I may have been doing it a little in my head). After all, he was My Husband enjoying his vacation in his own way – getting a great deal on something that he knows he will buy anyway. Manicure for me; dickering for him.

He came back smiling, so I knew that he saved us at least ten bucks. Maybe twenty, but he was only smiling, not strutting. He went back to the room to stow our shit so we wouldn’t worry about it as we jet-skiied our butts off. (That’s literal, by the way; there’s plenty of vibration).

The previous water-daredevils (which is what I was now considering myself) finished up (alive) and returned the jet-ski, and so it was our turn. But My Husband had not yet come back. (“My Husband is late again.” Eye-roll.)

The rental dude came sauntering over – that’s what they do in the Caribbean – they don’t walk or even stroll. They saunter. And he said:

“Where is your man?”

I got one of those.

He’s a bargainer, a worrier, a nervous traveler (to put it mildly), a reality TV watcher, a too-fast driver, a wine connoisseur, an ass-aficionado, a sleep-kicker.

And he kills bugs. 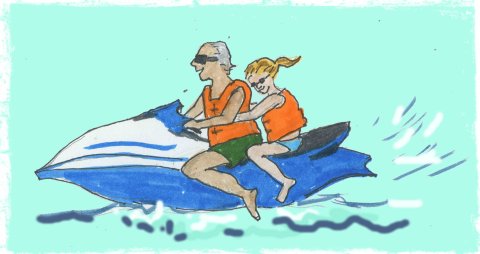