The Idea Of It

Several years ago –  about 52, to be honest – I was helping myself to some pasta at a family dinner.

I have to digress a bit here.  It wasn’t pasta. I never heard the word ‘pasta’ until decades later. We did not eat pasta in the 50s and 60s. We had Spaghetti or Macaroni. Period. I am not quite sure when Spaghetti became Pasta.

Okay, back to the story. I was grabbing a bowl of spaghetti. I carefully measured a half-teaspoon of grated cheese, as one of my aunts watched.

“I can see that you like the IDEA of cheese more than the cheese itself,” she remarked.

You may wonder how I can remember so clearly such a minor comment made over 50 years ago. Because I hated when grown-ups made fun of me, that’s why.

I can actually see the truth of that small observation.

There are quite a few things that I like the IDEA of a lot more than the thing itself.

Before I met my husband, I had a boyfriend with a boat. It was extremely appealing (one of the only appealing things about him, as a matter of fact). Until I spent some time on his boat. He spent most weekends in the marina, working obsessively on the boat, while I tried to prepare dinner in Munchkinland kitchen with two lukewarm burners and a dirty microwave, pretending to ignore the bilgey marina smell.  Once in a very great while, we managed to actually take the boat out of the marina, and we went for a ride. Which made me slightly nauseated for the rest of the day. And the day after.

(and by the way, I briefly – very briefly – dated a guy with a plane. Huge bragging rights. Lots of throwing up.)

How cute are one-piece outfits? Unless of course you have to sit down. Then there doesn’t seem to be quite enough material in between your shoulders and your crotch. Ouchey. And you should never try to go to the bathroom in one of those, as you have to peel off the top half, but it’s connected so it just dangles there – with the sleeves drawn by some scientific magnetism to the toilet bowl.

Aroma: Wonderful. The baseball in your belly that lasts for hours:  Not so much.

I will make an exception here for my Aunt Evelyn’s donuts. They were amazing. But that was more than 50 years ago, too. Dunkin Donuts does NOT have her recipe.

(And how come, by the way, microwave popcorn smells so good and tastes so ordinary?)

Jazz is the intellectual snob of music. It’s for the thoughtful, educated, sophisticated. And since I am all those things, I’ve really tried to like it. But it makes my teeth hurt. And I challenge you to find a Jazz song that doesn’t sound exactly like the one I just tried to listen to.

And speaking of music, at the risk of Rock ‘N Roll blasphemy, I don’t like Buddy Holly.  Too chirpy. (Oh, what a relief to finally say that…)

And also in the Music category:

It’s so exciting to buy tickets to see your favorite artist. Sharing his music with you, live and personal. Except that you are in the third balcony and you end up watching him on a big screen, otherwise he’s just a blurry little dot getting blotted out by the cell phone of the dude in front of you. And then you have to miss 35 minutes of the little dot waiting in line for the bathroom.

I was a Lit major in college. I love books. But come on, 1,440 pages of heavy tragedy?  Too heavy for me.  I just can’t carry that around. Or even hold it for very long. And yes, I could read “War and Peace” on a Kindle. But then who would know I am reading a huge complex book? Kind of diminishes the only thing I like about Russian novels.

Let me circle back to my original experience with the IDEA over the REALITY. Because I was at a party then, and I know now that Parties are the epitome of things that are better as ideas. I love anticipating a great party, planning an outfit, preparing witty quips, putting on a second layer of makeup and fancy jewelry. And then I get there, and realize that I am overdressed. And too shy to talk to anyone. And wonder how soon I can go home and watch TV.

And PICNICS are worse!  Whoever thought it would be fun to make eleven trips carrying all the food outside so you can swat flies while you eat it balanced on your lap on plates that slowly become part of the food they are holding? Who thought that was a great idea? 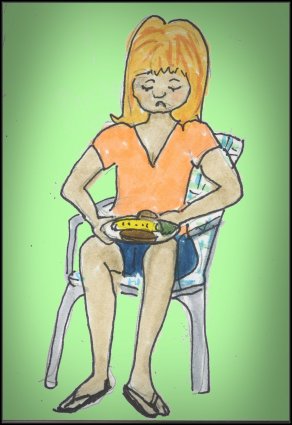