I graduated from high school in June of 1969.

I graduated from college in December of 1974.

No ‘four years and out’ for me. I liked college. I took my time.

I had no idea what I wanted to study, so I tried it all. I started in Nursing and ended up in English.  I have a minor in History and I took a nice little side trip in Art. And I have college credits in both Bookkeeping and Beekeeping.

Back then, if someone asked my father what I was majoring in, he answered, “Transferring.”

But my father also used to say (until the day he died at 88) that he didn’t know what he wanted to be when he grew up. So he took my meandering in good humor.

At UConn, you needed 120 credits to graduate. When I got to 148, my advisor (and my mother) thought that was quite enough. I had no choice but to graduate.

So in January of 1975, I started looking for a job. I had my credentials to teach, but no one was hiring. 1975 was a peak year – peak recession, that is.  Unemployment was high. Inflation was higher.  I tutored my mother’s friend’s kid. Neither the kid nor I was much interested in his homework, but it gave me gas money.

I got a job eventually at the brand new industry called Cable TV. I typed in the weather and the channel guide alone in the building at night. I wasn’t much of a typist. Some viewers might even remember “The Rockford Flies” and the Pubic Access Channel.

I got laid off.

And started looking again. It was frustrating. Frustrating enough that I actually considered enlisting in the Army. That made my father laugh.

I sent resumes. I went from building to building, filling out applications when I didn’t even know what the companies did. And whenever I could wrangle an interview, I interviewed.

Oh, I told HR managers and potential bosses how much I wanted to do … um … whatever it was they did.  How I was willing to start at the bottom. How I was a hard-worker and a fast-learner. How I loved Overtime. Or maybe part-time. That I loved talking to irate customers. That I was a great team player. That I liked working alone.

And everyone told me No.

Sometimes they were condescending but mostly they were sensitive and sympathetic.

They invariably ended the conversation the same charitable excuse: “I’m sorry, but you are just overqualified.”

Then one day I got an interview with a grant program that provided services for the elderly. They needed someone to type names and addresses on service orders. And file.

I could file!  I was an English major! I knew the alphabet!

And I had a nice boring interview with the Administrative Director.

And he said the same boring thing.

“I don’t even know why we’re interviewing you. You’re over-qualified.”

And I lost it.

“I’m not over-qualified! I’m over-educated! I can’t really DO anything!”

And I got the job. 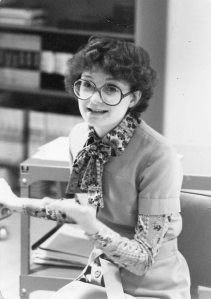 Me, Happily Overqualified At Work.