Last night my husband was describing to me the best photograph he had ever taken – a monarch butterfly perched on a dewdrop on a flower.  He said that he loved that photo, because it was the most beautiful thing he had ever created.

He lost track of that picture years ago, and he wondered if some day he might find it again, just by accident.

“I wonder where it could be?”  he asked.

“It’s with the Frank Sinatra record,” I said.

He didn’t know what I meant.

In 1941, Lake Compounce in Bristol Connecticut (my hometown) was THE place to go for great music.

An old amusement park with a fabulous ballroom, all the big bands came to Lake Compounce. And one event in 1941 packed the ballroom.  It was Tommy Dorsey and his orchestra.

My mother, not quite eighteen, was one of the teenagers that came to dance to Tommy Dorsey’s band. And to listen to the handsome young man who sang with the orchestra – Frank Sinatra.

“He was wonderful,” she still says many many years later, in exactly the same voice I use when I talk about James Taylor.

After the show, my mother and her girlfriends waited for their ride. The park emptied out. Some of the band members hanging around came to talk to these pretty girls.

And that’s how my mother met Frank Sinatra.

“It’s not like he was a nobody,” she said. “It was early in his career but he was already a big star.”

And Frank Sinatra bought her a hot dog.

AND – he gave her an autographed record!

But here’s the problem:

No one but my mother has ever seen this record.

All the while we were growing up, my mother told this story, and told us she still had that record…somewhere.

But as the years went by, our doubt grew.

“You made that up,” we accused.

But she insisted, “Frank Sinatra bought me a hot dog and gave me an autographed record.”

And exasperated, she promised us that someday she would find that record, and PROVE it to us.

And this became our “lost place”:

For everything that ever went missing –

we knew where it was.

And we all vied (especially my Dad) to be the first to proclaim:

“It’s with the Frank Sinatra Record.” 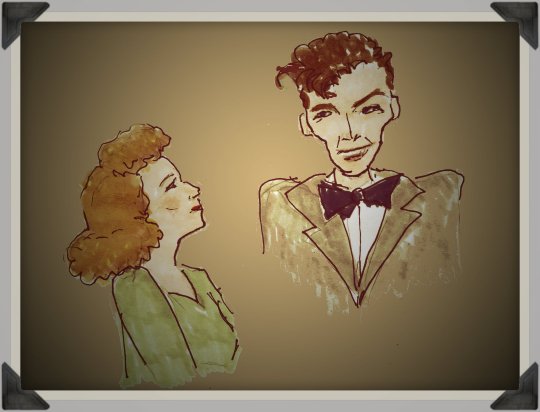