You know what I miss?

I miss the Drive-In.

Drive-Ins were such a weird invention. Some nut-case (actually his name was Hollingshead) way back in the twenties decided that it would be a great idea to sit in your car and watch a movie.

It took about twenty years to perfect the screen and the sound… and boy, was it far from perfected.  But I loved it.

When I was a little kid, we used to go to the Plainville Drive-In. We’d get there early, because we wanted a good parking space, and because they had a great playground. The playground had trampolines. Oh my God, that was the coolest thing.

My little brother could not figure out the trampoline. He was barely more than a toddler, and he couldn’t jump with both feet at the same time. It was hysterical–for me anyway. He was the baby boy after three girls in a row (me being number three), and everyone adored him. So naturally I was delighted by his stupidity.

I loved the movies but sometimes it was a toss-up whether I would watch the movie or jump on the trampoline all night. (My mother solved that dilemma for me.)

Most kids wore their pajamas to the Drive-In, which I thought was especially festive. Like Christmas Eve in the middle of summer. But my mother didn’t like us to go out in pajamas. Sometimes I could sweet-talk her into letting me change into pajamas once the movie started. Then I’d pretend I had to use the restroom, so I could walk around outside in my PJs.

We’d watch the movie – usually a double feature with a long intermission (filled with dancing popcorn and hot dogs and cups of coca-cola to promote the overpriced concession stand) through our scrubbed, but still blurry, windshield. Sometimes we watched through raindrops. There was a post with a speaker that Dad precariously attached to the windshield. The tinny sound was awful and fantastic at the same time.  And there was always someone who would drive off with the speaker still attached, and they’d rip it right off the pole. I loved that part.

If you opened the windows you were invaded by mosquitoes. If you didn’t, the windshield would steam up. My sisters and I would play tic-tac-toe on the side windows. Of course, there were some cars that were extra steamy.

We saw some wonderful movies at the Drive-In. I think so anyway. I can only recall one. We went to see “Hatari” with John Wayne. My Daddy loved The Duke.

It wasn’t playing at my beloved Plainville Drive-In. We went to the Watertown Drive-In, which we had never been to before. My father couldn’t find the place and we drove around for a long time, so naturally my father had to stop the car twice so I could throw up. We got to the movies late, and my mother let me watch standing outside the car in the cool air. I could hear the sound from the big speakers blaring from the concession stand. Baby elephants followed around a very pretty actress.

When I was sixteen, the Drive-In changed. And changed me.

I went to see “Two For The Road” with Audrey Hepburn – and with Kenny. My mother reluctantly gave me permission. Kenny’s mother did not, but he was embarrassed to tell me, and so he snuck out of the house. We double-dated with kids I don’t remember at all. I do remember the movie. It was exceptional, and it’s still one of my all-time favorite movies.

And then the second feature came on. I don’t remember it any more than I remember the other kids in the car. 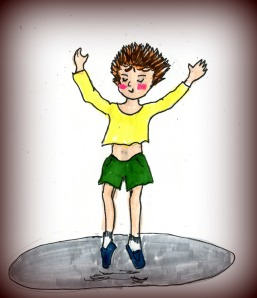