Starting Off On The Right Foot

I am happy to report significant progress in my third Zumba class.

For those who (perhaps wisely) pay no attention to pop culture, Zumba is the latest fitness craze.  It is like the aerobics classes that were hot in the eighties, except with more hip action and much cooler music.

My first class didn’t really remind me of my old 1985 aerobics class though. For one thing, there were no leg-warmers. Yeah, back then I wore a black leotard with white tights and pink leg-warmers. (My mother wouldn’t pay for ballet lessons when I was ten. It obviously affected me.)

It reminded me more of the tennis lessons I took in 1989.  Because I did a lot of standing there watching the action pass me by.

But I was a little improved in my second Zumba class.  It helped that I took an easier class. Instead of 37 different step combinations in a single dance, we had four. That worked for me. I actually got to dance.

Class Number Two also brought back exercise memories. Distant memories. Back in the sixties, high school phys ed included Square Dancing. I didn’t grow up in Texas. I grew up in Connecticut. My life revolved around war protests and the Beatles. Square Dancing was square.

But secretly, it was really fun.

I liked memorizing the steps until they felt natural. Until I could do them without counting. That’s when it stopped being Phys Ed and started being Dancing. Even if I couldn’t really see the difference between Allemande Left and Allemande Right.

And just like Square Dancing, my second Zumba class presented me with the same little challenge.

But a little directional deficiency is no deterrent for me.

I showed up at Zumba Number Three with a salsa attitude and frisky feet. 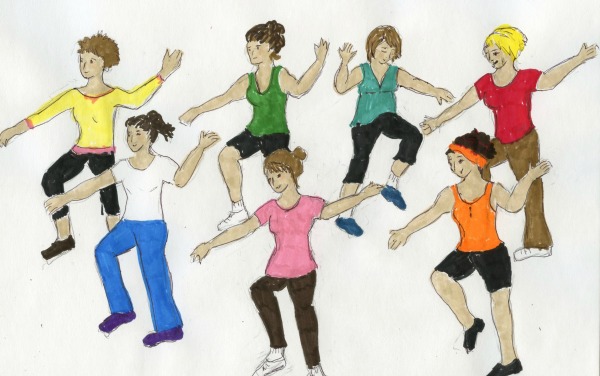