By Christmas we were pretty much living together.  We weren’t kids – he was in his forties and I was thirty-eight. So we didn’t see much sense in taking it slow.

Over decades of dating I had learned one thing about love. You’re better off not expecting him to be perfect. Real love is not loving everything he does, but forgiving him for most of what he does.

The following year was the test.

Christmas 1990.  We had been together just over a year, and I was just six weeks away from my fortieth birthday.  These two events led me to conclude that my Christmas present would be an engagement ring. I was sure. 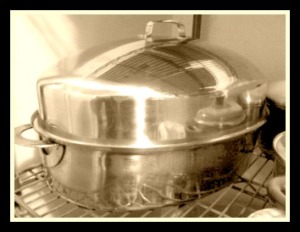 And that’s not all. It seems he did all his shopping in one store – a kitchen store.  I got dishtowels too.  And an apron.  Let me repeat. AN APRON.

I can’t even express how disappointed I was. I knew that he was a sweet guy, and didn’t mean to give me servant’s presents. He was actually excited about the pan. It was big. He likes big.

I smiled through it all, even though my jaw was beginning to hurt.

Then we went to his brother’s house for Christmas dinner. His brother had met his girlfriend about the same time my husband met me.

And guess what his brother’s girlfriend got for Christmas.

That’s when I stopped smiling.

And later that evening, back at home…well, let’s just say I was slightly upset in a moderately loud way.

“You wanted a ring?” he asked, completely surprised.

It all ended well enough, I guess. I got my diamond ring six weeks later for my fortieth birthday. And we squeezed in a wedding before the end of the year (November 30, 1991 ) – so I didn’t have to be a forty-one-year-old bride.

My brother-in-law doesn’t even have that wife anymore.

And I have a diamond ring (a big one), and the same husband, and a roasting pan to boot.

But every Christmas, when I take the roast out of the oven, someone inevitably says, “What a great pan.”

I would recommend you not do that.