Maybe I Was Right After All

I am a product of the Woodstock generation.

I graduated high school in 1969 – the year of Woodstock. Not that I was even aware of Woodstock at the time. I was clueless (which was not even a word back then) of the concert/festival/free-for-all until after it had already occurred.  But I wholeheartedly jumped onto the Peace Train of sex, drugs, and rock-n-roll as soon as I stopped being so ‘out of it’ – which was 1969 for ‘clueless.’

It wasn’t all sex, drugs, and rock-n-roll. The rock-n-roll was serious. The sex and drugs were more of a tentative experiment.

But, besides our incredible music, there were other serious issues for us Woodstock kids.

War, the struggle for civil rights, assassinations, a government that was lying to its people.

And we wanted things to be better.

Growing up in the sixties, we barely remembered the powerful and harrowing fight for civil rights in the fifties. We only knew that things were supposed to be better, and people were now supposed to be equal – and we were distraught and often angry as we realized it wasn’t so.

We saw our leaders and our role models assassinated, and we felt adrift and bewildered. We thirsted for new heroes and yet our sudden loss of innocence caused us to distrust those who might lead us.

Women often found themselves, at best, dismissed and belittled. At worst,  powerless and excluded. From good jobs, financial security, a voice in politics, and even from physical safety itself.

And most significantly – we faced War. We watched our friends and brothers drafted into a war that no one could explain or justify. We saw Vietnamese citizens and our own soldiers die on TV. Government lied to us and we knew it. And when it was apparent to the Establishment that we knew they were lying, then WE became the enemy.

And so we rallied, we marched, we protested, we defied.

And then we slowly surrendered. We BECAME the Establishment. Indoctrinated into the cult of status quo and the gorgeousness of money.

To be fair to us Woodstock kids, we did not abandon all of our idealism. We brought some of our principles with us.

And some things DID change for the better.

The Vietnam War was recognized as the failure and tragedy that it was, and it was brought to an end. I think our protests made a difference, but I also believe that the Pentagon Papers and even Walter Cronkite made more of an impact than we did.

Some changes were more gradual. Inevitably, as we aged and so gained the reins of power, our dormant (but not dead) beliefs gained power as well. There is no denying that there has been an improvement in opportunity and acceptance for women, for people of color, for same-sex love. But there is also no denying that it is imperfect and that there is still such a long way to go.

And that it has taken way too long.

But now – fifty years later – there is a new generation of kids who want to change the world.

They want to save the planet.

And I want for them to succeed. I want them to see that our mistake – all that time ago – was to accept that ‘gradual’ was good.

I want them to be impatient for justice.

Fifty years ago, I thought that kids would change the world. 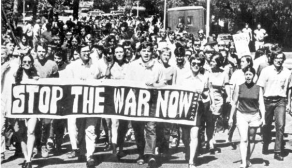