I Have A Few Questions

On this day of the long-scheduled release of thousand of documents related to JFK’s assassination, I am reposting my blog from last year.

I have mentioned before my mild obsession (Can an obsession be mild? Is that an oxymoron?) with unsolved mysteries. (Eureka, Sort Of)

In part, because I always like to show how smart I am. I was one of those obnoxious kids in grade school whose hand was always waving frantically in the air. (Well, OK, that was high school too. And college. And grad school.)

But mostly, because I am one of those types that just NEEDS to know. I hate a mystery with no answer.

Why, for example, when suspected murderers are dying, why don’t they just TELL us? I felt that way with Dr. Sam Shepard, who I thought was almost certainly innocent. Of course, it would have been even more convincing had their REAL murderer given us a death-bed confession.

Or Lizzie Borden, who on the other hand, I think was probably guilty. She’d been acquitted. She was already pretty much a social pariah in Fall River, so she had no reputation to lose. So why didn’t she just tell us?

I have a couple of minor, trivial, mysteries I will share in my next post, but I am in a serious mood today, and so I want to share a few important mysteries.

I am a Conspiracy Nut.

I’m not one of those true overachieving nuts who believes EVERYTHING is a big conspiracy.

I have just a few very specific conspiracy beliefs.

Perhaps it stems from the fact that some momentous world events happened when I was at my most impressionable. Those experiences that made me question authority for the first time. And understand, for the first time, that Authority is not always admirable or honest.

I don’t want to be too preachy or morbid. And I am no expert. So I won’t go off on a huge rant about the numerous unanswered questions or inconsistencies. I won’t beat the drum for thousands of pages or millions of words.

Let me just pose three questions. One question on each awful puzzle that has haunted me for decades. That may be demonstration enough. A few simple questions to represent the hundreds that continue to plague me.

President Kennedy was assassinated in 1963. His murder was the most horrific thing most people had ever experienced. And I was only twelve. I watched events unfold, as I stood before our black-and-white TV, with my hands to my mouth. I saw Lee Harvey Oswald killed. I have only witnessed death once since… in 53 years. Two deaths. One a cousin, in her hospital room. One – an assassin on live TV.

There are many unanswered questions. I’ve read dozens of books, probably hundreds of articles. Most people who believe the lone gunman theory think that those of us who don’t are in denial. That we just cannot accept that one miserable unknown human being could have the power to change history.

But I am not naive. I am not an idealist. (Well, OK, perhaps somewhat of an idealist.) I do not think Oswald was a patsy in the true sense of the word. I believe he was involved. It’s the “lone” part of the “lone gunman” theory that worries me.

Here’s my one single JFK question. How does a young ex-marine who defects to the Soviet Union in the height of the Cold War– how is it that he was able to return so easily 2 1/2 years later? Why did the FBI or CIA appear to have no interest in him?

Dr. Martin Luther King, Jr. was murdered in 1968. I was 17. He had changed the world significantly in just a few years, and he was not yet 40 years old. He was shot on the balcony of the Lorraine Motel in Memphis. The convicted murdered was James Earl Ray, a petty criminal and avowed racist.He recanted his confession only a few days after pleading guilty.

Here’s my Dr. King question: Ray was captured in London, with a false passport. He had escaped through Canada to the UK and was attempting to travel to white-ruled Rhodesia.  In 1968, air travel was still extremely expensive – out of the reach of most Americans. Where did a loser like Ray get the money for his escape?

Only a few months after Dr. King was assassinated, Bobby Kennedy was shot as his entourage moved through the kitchen at the Ambassador Hotel in Los Angeles after the California Democratic Primary. The assassin was Sirhan Sirhan, a young Palestinian (whose family was Christian, by the way) who may have been truly deranged. He fired his 22 even as he was wrestled into submission by members of Kennedy’s group. He emptied the gun.

Here’s my RFK question. Sirhan’s gun held 8 bullets. Kennedy was hit three times, but only 2 bullets were recovered, with one supposedly lost in the ceiling. Five were recovered from other injured people. That’s seven bullets recovered. So there is just one bullet unaccounted for (the ceiling bullet). So why were there extra holes in the ceiling and the walls? One door-frame was photographed with 2 holes circled by investigators. By some accounts, bullets had been recovered from these or other holes. Sirhan was firing wildly as he was subdued. But that is one hell of a lot of ricochet. 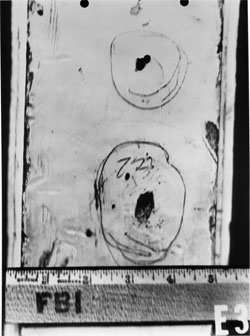 I know this is a crazy atypical post for me. I wasn’t sure whether to even publish it. But I’ve been thinking so much about the passage of time. In the not-too-distant future, all the folks who were witness to these events will be dead. And perhaps no one will care much about unanswered questions.

I hope the interest in Truth will still matter.