When people talk about “Attitude.” they are usually referring to a bad one.

I know what that means. I was told often enough that I had a “Bad Attitude.” Usually by a boss because I showed a lack of tolerance for a stupid decision. But that was early in my career, and it was quite true. But I learned. I learned that I couldn’t make every decision for my company, and even decisions that I disagreed with may actually work out. And I learned that my co-workers were mostly just like me, trying to pay their bills and make it through the week. So I kept my bad attitude for big stuff – immoral or unfair behavior – both at work and in my personal life. Which meant that, overwhelmingly, my attitude was tolerant and happy. My attitude was kind.

And so I became my mother.

I cannot be more fortunate.

My mother is all ATTITUDE.  The good kind.

There is not sufficient room in one blog to discuss all the ways my mother’s attitude is outstanding. For instance, she doesn’t complain about her health – even though she’s got issues with her 93-year-old body. She enjoys her life – and accepts with good humor her limitations.

I could continue for thousands of words on all the ways Mom’s attitude inspires me.

But here’s just one of they ways:

Mom was reminiscing recently and she said, “We had so much fun when you kids were little!” And we did. But we didn’t have many vacations; we didn’t travel the world; we didn’t eat out. We went to the park. We went skating in winter and swimming in summer. We played in the yard. We went to the library. We spent time with our cousins.

We had so much fun.

And Mom searched the sofa cushions for dimes so we could have an ice cream cone.

We didn’t have much money when I was a kid. I’m sure my father and mother worried about it a lot. But complain about it? NEVER.

My mother’s attitude never changed. She always believed (and still does) that being happy has very little to do with how much money you have.

She’s as happy with a hot dog as with filet mignon.

We went to the movies any time she could scrounge up enough change. We played cards when she didn’t.

We laughed a lot either way.

And we still do.

The only regret I ever heard her make about money is this:

My parents had three girls in a row (I am the youngest of the three), and then several years later, my little brother.

When us girls were young, and Mom and Dad would take us to the ice cream parlor, we would ask, “What can I have?”

And Mom would always say to each of us, “You can have a small cone – one scoop.”

And we were delighted to have an ice cream cone of whatever flavor we wanted. What a great treat!

When my brother was growing up, finances had improved for Mom and Dad. Which was a good thing, because my parents wanted us all to go to college, and we did.

But my mother has told me this story more than once… so it weighs on her, I think –

When my brother was still a kid, but us girls were already on our own, my parents would go to the ice cream parlor with just my brother.

And Mom would say, “Anything you want.”

And my sweet mother always ends this story by saying, “I still feel bad that I never really had a chance to say that to you.” 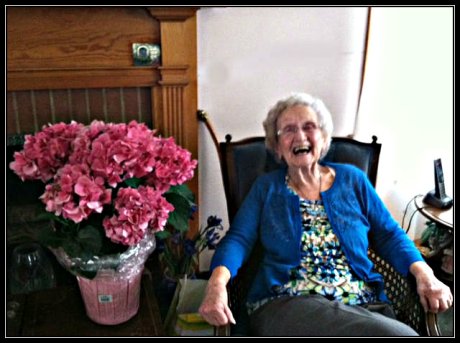 I still love a single scoop.