In tribute to the amazing Mary Tyler Moore, here’s a post from 2 years ago. She always made me laugh, and that’s about as nice a compliment as you can get. Thanks, Mary.

I read the other day about a person having an inappropriate case of the giggles. And oh my, a memory jumped up and yelled, “You despicable person, you!”

Do you remember the old Mary Tyler Moore episode about Chuckles the Clown?  The station’s resident clown was the grand marshall of the circus parade. He wore his Peter Peanut costume, and in a bizarre twist of fate, was shelled to death by a rogue elephant. All the guys at the studio could not resist making terrible jokes, and Mary was appalled at their lack of decorum. Of course, their laughs had played out by the time of the funeral, and they were properly respectful, and it was Mary herself who came down with uncontrollable, ill-timed laughter.

That episode was one of the funniest things I had ever seen on TV.

Until of course I had a similar experience.

At least the occasion wasn’t tragic. I have that excuse, at least.

It was 1986, and I was working in the cable television business. I was based in Connecticut and my boss, Rick, the regional Finance V.P., was based in Virginia. I liked working for him very much. (and not only because it is sweet to have a boss 324 miles away.) He was an intelligent man with impeccable manners.  Incidentally, he had a stutter.

We were interviewing companies in order to change credit card processors. Rick came up from Virginia. A very nice man came in from Omaha to pitch his organization’s service. He was smart and friendly and well-prepared. He also had a stutter.

There were six of us in the meeting. We had no conference room in our offices, so we had just pulled chairs around in a circle in the largest office. I sat between my boss and Jim, the credit card company sales rep.

The meeting was productive and cordial, but gradually I became aware that the more that Rick and Jim talked, the more they seemed to have some kind of synergistic effect on their respective stutters. It was almost as if each man’s stutter encouraged the other’s.

Sitting between them, I listened to these two smart, nice gentlemen:

I liked and respected these guys. I have stutterers in my own family. It’s fine. It never bothers me. And I am a good polite person.

I was overcome with the giggles.

I tapped my foot. I covered my mouth and pretended to yawn. I pinched myself. scribbled in my notebook.

I coughed. My shoulders shook.

Eventually, I started to cry.

And I ran to the ladies’ room and laughed myself silly. Then I composed myself and rejoined the meeting.

A few days later, I was out for a drink with a co-worker who was also at the meeting.

“Did you find it hard to sit in that meeting, and not laugh?” I asked.

“NO!” My friend said, horrified. “OF COURSE NOT! What is wrong with you?”

Oh, I am a terrible person. 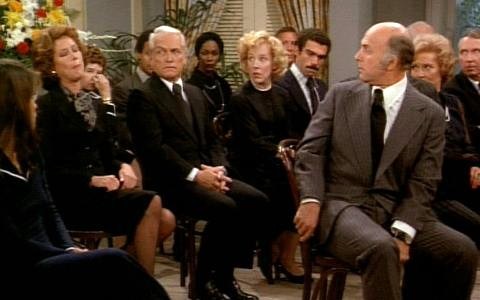 “A little song, a little dance, a little seltzer down your pants.”