This is Part Two of my apology to doctors. I have harbored a grudge for too long that medical folk are in love with expensive procedures. Because of course, I secretly think their number one goal is money, not my health.

But I’ve been seriously wrong a couple of times.

The first – my sweet dentist, Dr. Robert Rafaniello, who postponed some dental work so that my parents wouldn’t have to foot the bill. (See: Sorry, Doc. Part One.)

My second example of an amazingly admirable and ethical doctor was a plastic surgeon I visited more than thirty years ago.

I had dated a bit in high school. Not very much, but I did go to the Junior Prom with a very nice boy. And although I may not have been completely devastated, I will admit to being very disappointed that no one asked me to the Senior Prom. I spent Prom night in my bedroom, feeling horrible. (I wish I could go back and tell that sad young girl that she was prettier and sweeter than she – and those boys – knew.)

An interesting thing happened in college. I developed a shyness I had not felt in high school. I was a serious student, and apart from one rather deranged boyfriend, I never dated at all.

And things only got worse in my twenties. I worked hard and got my graduate degree at night. I hardly spoke to anyone of the male persuasion. I got shyer.

I finished my MBA when I turned 30. And suddenly – I had time. I had never had free time. I hardly knew how to fill it. The first week I read seven novels. And on top of all that free time I acquired at thirty – Holy Cow, I was thirty. THIRTY. How the hell had that happened?

I decided I wanted a boyfriend. Maybe even a husband.

But I didn’t even know how to date. Never mind how to find a date.

But I was a very logical young woman. I shamelessly and deliberately made friends with a very social, very pretty woman in my office. We started to go out on Tuesday and Thursday nights. And I watched her. She was a very accomplished flirt. I was a very good study. I just copied what she did, and by the end of the year, I could flirt. A little.

I didn’t have as much luck in the boyfriend department as my beautiful friend, however. I knew I wasn’t particularly beautiful, but plenty of ordinary looking women found spouses. I wasn’t sure how they did it, but I was determined to better my odds.

One thing my pretty friend had that I did not was boobs (Okay, two things). She was well-endowed. Men very much appreciated her well-endowedness.

I was flat-chested. I remember when I was twelve, looking at women’s bosoms and thinking, “Pretty soon I will look like that.” I believed it. I never thought to take a look at my mother and my older sisters. Boobs did not exactly run in the family. I was no exception.

It hadn’t seemed to matter much. But now that I was in the market for a boyfriend/fiance/husband, I thought it might help.

I chose the plastic surgeon because I liked the building where he had his office. If he appreciated the aesthetics of good architecture, he could perhaps create attractive breasts.

The doctor took his time examining me. I was self-conscious but I figured he looked at tiny breasts a lot, and it was probably no big deal. (literally)

“Why do you want breast implants?” he asked.

“Well, I thought I would like to look a little better. My clothes would fit better, and maybe I’d feel a little prettier. Nicer breasts might give me a little more confidence.”

“Go ahead and get dressed and we’ll talk more in my office,”

“These are implants. They look nice and soft but they often get pretty hard as your body forms scar tissue around them. So they will make you look bigger, but they won’t feel like real breasts.”  (Note: Maybe they do now; this was 1983.)

He had me hold one in my hand.

“That would make you about a B cup,” he said.

“Here’s the thing,” the doctor continued. “Most women come here for breast augmentation because they’re miserable. They hate the way they look. Their self-esteem is so bad, they can hardly function. Their whole thought process is focused on how bad they think they look. But I don’t see that in you. I see a basically happy woman who would like to look a little better. And this is a pretty serious – and expensive – way to look a little better.”

I had to agree.

And the doctor said, “Why don’t you buy yourself a few really beautiful padded bras?  And then come back in a year if you still want the surgery.”

That was half my lifetime ago.

And it hasn’t matter one bit. 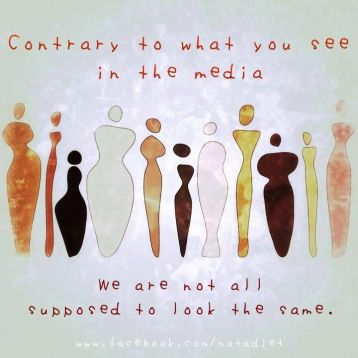