Maybe I can just ignore it, and I can fall asleep anyway, and not have to deal with it until tomorrow, I think.

It’s such a little thing. Hardly noticeable, I think.

See, Hubby can sleep. I’m being ridiculous, I think.

I can count it, like counting sheep. It will make be drowsy, I think.

Do you know how many 15 second intervals there are in an hour? 240.

It turns out that 600 is my limit. That’s how much I tolerate before I drag myself out of bed.

Of course, this is only the beginning of the 1:30 AM mystery.

Back when I was a kid, my parent’s house had two smoke detectors. One on the first floor and one on the second. But we’ve gotten more careful.

Instead of inventing ONE smoke detector that can sense smoke anywhere in the house – which you think we just might be able to in the last 50 years – someone has decided that a much better idea would be to install a smoke detector every seven feet. Just in case it is a very small amount of smoke. I guess in case Fido is smoking a joint in the attic.

But our house has SEVENTEEN smoke detectors.

It’s a big house. But it’s not Versailles, for God’s sake.

So now I have to find out which one is chirping.

This means standing under each one – if I can remember where they are – and waiting till the next chirp.

Bedroom is an easy elimination. The sound seems more distant.  So out to the hallway. I am barefoot, so I am hoping than none of the three cats has puked since we went to bed (which would actually be kind of a miracle).

You may be wondering why my husband isn’t involved in the search party. He hasn’t woken. He sometimes doesn’t hear the smoke detector GOING OFF, never mind a brief, tiny chirping. I could wake him, but he couldn’t search the house. He would have no idea if he were standing under the offending unit.

Not the hallway. Why does the fifteen second interval between chirps now become 60 seconds? I do not know the answer. But I know it is the truth.

Not the little room I use as my office.

Not the guest bedroom.

I go downstairs and wait in the kitchen. But no, the next chirp sounds distinctly UP.  That may eliminate four more. Maybe.

Here’s another question. Why, if the battery is dying, but there is enough power to chirp, why oh why can’t that power make a little flag pop out that would say, “IT’S ME!”?

I go back up and into the storage area over my husband’s office. The cats hang here, so I am in grave foot danger.

But then I hear it.

It’s right over my head!  Hooray.

Now that I have identified the culprit, I can take care of this. Only.

Only it is just out of my reach. And I don’t know where the batteries are.

Besides, I need to wake up my husband. Why should I be so annoyed by myself?

He staggers out of bed. He puts on his slippers. It’s safe now that I have tested all the floors like a naked minesweeper, but he never goes barefoot. He doesn’t go to the bathroom barefoot.

I point. He pulls the damn cover off and goes somewhere where he hides batteries.

I go back to bed.

Five minutes later he joins me.

We wait. No chirping. (Although how would HE know?)

And we wait for sleep that doesn’t come.

We turn on the TV.

Which would have drowned out the damn chirping in the first place. 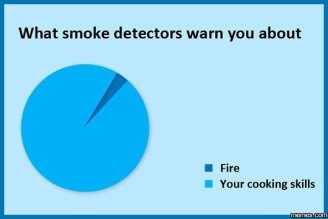 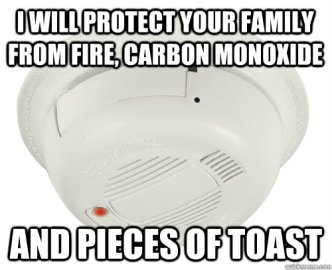