These Are A Few Of My Favorite Things (Part One)

We’ve all had the discussion.

Sometimes spurred by a TV show, or an article in a magazine. Most likely, though, after several beers at the local bar.

What would you save if your house was on fire?

OF COURSE, I would save my little pets.

And my family photo albums.

So let’s assume those precious things are all safe.

Then it’s a matter of deciding what are my most meaningful possessions.

I made a little game of this question as I cleaned the house this weekend. I looked at all my things – the dust-worthy and the usually forgotten – with an eye for how much they mean to me and how irreplaceable they are.

I set myself some little rules. 5 items max. Two trips only. And only 1 can be a big item. My husband (who I am going to save. of course. right?) can help me carry the one big thing. Then the other stuff has to be carried out at one time by me in my second trip.

So here’s my Big Thing: 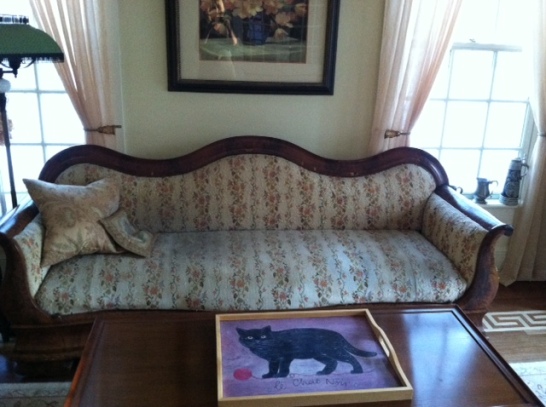 My sofa. And if you look, you can see my reflection in the picture above. Which is fitting.

I have had this sofa for more than thirty years.

You could say I inherited it.

My maternal grandfather was an immigrant from Poland. Dziadzi (“Ja-jee” – Grandpa in Polish) struggled all his life to support his family. He left Poland at 17, and lived for a while in Baltimore and Pittsburgh before settling in the Polish enclave in New Britain Connecticut. He and my grandmother and their two daughters lived in a cold-water third-floor one-bedroom apartment. He barely survived the depression, as someone who wanted his WPA job nearly killed him for it.

He didn’t have an easy or a particularly happy life. But he loved his family. He used to make me a little mouse out of his handkerchief, and sixty years later, I still know how to fold a cloth into a mouse.

He never had a car. He did get a television around 1962. He liked Walter Cronkite.

When he died at 88, he didn’t have much to show for his life. Except of course for two amazing intelligent and warm-hearted daughters and seven genius grandchildren (and yes, I am including myself… I am proud of those genes.)

When my mother settled up all the bills and final expenses, she divided the little money Dziadzi had left among her and her sister, and the grandchildren. Nine shares total.

Well, it’s easy to spend $300. I could easily have blown it at one time on something trivial. But I wanted something that would last. Something to show for my Grandfather’s life.

Not long after his death I happened upon a yard sale. An old woman was moving from her large house to a small apartment, and she was selling her beautiful things. And there on the lawn was this lovely antique camelback sofa. For $300.

My Grandfather gave me this sofa.

I would never part with it.

(Next Up: My other four choices)