This is a story of a childhood friend.

But the story isn’t really about the friend, or about me, or even about friendship in general. When all is said and done, this is a story about my mother. Today is her 91st birthday, and this story is about the kind of mother and person she is.

I met Daisy when I was twelve. Daisy is not her real name, because I don’t know what happened to her, but my guess is she is a very interesting person today, and I would never want to embarrass her with my probably distorted reminiscences.

Diane, my neighbor-across-the-backyard fence, introduced me to Daisy. Diane was a year younger than I, and Daisy was a year older, but they were both in the same grade. This was not because Diane skipped some grades. They went to public school, which, in my mind, meant they were getting a lesser education from the get-go. This conceit was a direct product of the Catholic school I attended, since the nuns told us so at least twice a week.

So Daisy, repeating grades in an inferior learning institution, was at first the object of my disdain. But she grew on me. As a matter of fact, she mesmerized me.

She was as skinny as a rail, with little breast-buds that she enhanced by sticking a sock in each bra cup. I was equally as skinny, and equally as flat-chested, but had not even dreamed of using my socks in such an imaginative way. She teased her hair (at thirteen!) And sometimes wore eyeliner – those times being when her mother wasn’t around. Which was often.

Daisy chased after boys relentlessly. And she swore. And she smacked her little brother once in while. I had never done any of those things, but I was considering it.

She came from the wrong side of the tracks. Literally. You went over the railroad tracks and then down an alley behind the Post Office, and there was a cluster of very ramshackle tenements. Before I met Daisy I had not even noticed that alley. We were hardly rich ourselves, but this was Connecticut, and I suddenly felt like I had stepped into a John Steinbeck novel.

From the broken steps to the dishes in the sink to the always burnt-out lightbulbs, Daisy’s apartment was a wreck. There were too many kids and not enough rooms. And not enough bureaus, apparently. I had never seen so many clothes on the floor.

There was a lot of screaming going on at Daisy’s house, so mostly we hung out at my house or Diane’s. We sat in Diane’s garage, where there always seemed to be a new litter of kittens. And we walked a lot. We walked miles and miles, just wandering the town, looking for boys or talking about boys.

Daisy bragged about kissing lots of boys, but I never saw her do so. Mostly she just hollered rude things at her older brothers and their friends.She also claimed that she shoplifted regularly, but I saw no evidence of it. I did however, see one item that she stole. In the midst of her bedroom mess, I found Daisy’s fifth grade music book.

“Didn’t you have to return that book at the end of the year?” I asked.

I was friends with Daisy for about six months. Then one night – I think it was November – she came banging on my door to tell me her father had killed himself. I thought at first that it was just Daisy’s brand of drama. But it was true. It was front-page news the following morning.

I had never seen her father sober, and I had avoided him as much as possible. But I also knew that Daisy loved her Daddy.

Suicide. A mortal sin, per the nuns at my school. I had read a few stories, seen a few movies. There was always a note: “Please forgive me.” Not with Daisy’s father. He left a note blaming everybody.

Daisy and her family moved away sometime after that.

But I remember a late summer day earlier that year when I was reading in a shady corner at the bottom of our porch stairs. I was practically invisible in the late afternoon. And I overheard my mother and my aunt discussing Daisy.

“I know the whole family,” said my aunt. “They’re not good people. And Daisy is rough and fresh, and is always getting into trouble. Maybe you should think about not letting Nancy hang around with her. Daisy might be a bad influence on Nancy.”

I strained to hear my mother’s response.

“I tend to think,”  my mother said quietly,

“… that Nancy might be a good influence on Daisy.” 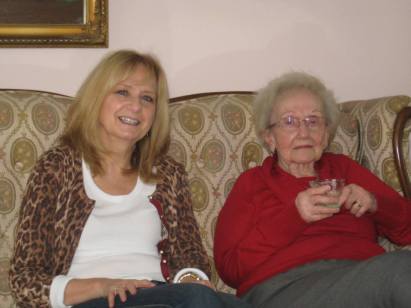 Mom & Me. Happy Birthday, Mom. You’ve been a good influence on me.