Okay, I have admitted that I was not a beautiful child.

I have also admitted more than once that I was an extremely late bloomer – like at sixty.

So from those two facts, you might be able to deduce that my thirties were not quite stellar.  I was better than homely but a far cry from pretty. Let’s say I was half-way there. More towards the unfortunate half, unfortunately.

Not that I didn’t try. I tried really hard. Hair and fashion and makeup were always important to me. I bought fake makeup and toy high heels at McClelland’s Five-And-Ten every year between five and ten. At eleven my mother let me wear pink lipstick. It was Cutex “Pink Cameo” which was rumored to be what Jackie Kennedy wore.  Thirty-nine cents; my first real makeup purchase. The first hit of my drug of choice.

By the time I was seventeen I had black eyeliner and Twiggy lashes. And white lipstick.  (Oh yeah.)

Not pertinent to this story, but a memory just popped up: In high school I was the very first girl to have pierced ears. Mia Farrow had pierced ears on Peyton Place and I thought that was really cool, so I pierced my ears with the torture they used to call “sleepers.” A gradual torture. Ouchy. But I got a rip-roaring infection and had to let my holes close up. And a few years later (at the time of the white lipstick), everyone had pierced ears. So I used my eyeliner to draw little flowers on my earlobes. Pretty creative, huh?

Anyhow… back to my thirties.

In my quest to be beautiful (or to at least stop looking like David Cassidy, which more than one person had pointed out to me) – I availed myself of every makeover and make-up instruction offer out there. Merle Norman, Avon, the multitude of counters at G Fox & Co (which became Filene’s which became Macy’s).

One day the lady who stocked pens and paper at the office told me she did MaryKay on this side, and offered to come over to my apartment that evening and do a makeover. And that night she sold me a ton of useful products.

About three weeks later I got a phone call from the supplies/beauty consultant lady.  I figured she knew that I had just about paid for the first batch of products. MaryKay was having a sort of party that week at the Marriott. All the area sales reps and their customers were going to get together for a mass makeover.  Fabulous!

I wore my biggest shoulder-paddiest dress and my perm was the spiraliest. I had been told to bring all my MaryKay makeup with me. I couldn’t go out barefaced (this was the Marriott after all – the biggest pick-up bar in Central Connecticut – I couldn’t risk being seen) but I used a light touch so my new makeover could go right over.

When I arrived, my beauty/paper clip advisor was disappointed that I wasn’t all made up. “This isn’t exactly a makeover,” she explained. “We are showing how great our products are on all sorts of people. So go to the ladies’ room and do your makeup like I showed you.”  And so I did.

And then the regional manager announced the big surprise for all of us MaryKay’d faces.

The secret purpose of the big get-together:  We were all contestants in a MaryKay beauty contest!

They sectioned us off by age group and we paraded across the dais. Four of the reps’ husbands had  volunteered to be judges.

It was about the most embarrassing, humiliating evening of my life.

I will never forget it. 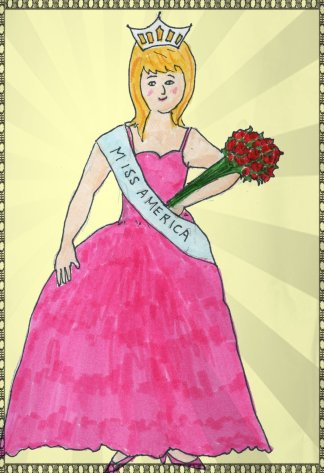