I am more than willing to try anything that will make me look younger. I will stand in line. I will pay pretty big bucks.

But – although I am often a beauty-fool – there is a little tiny piece of my brain (located right near the place that makes me wash the plastic forks) that refuses to completely flush my money away.

Yeah, I won’t spring for a spritz of French water to fake a perspiration glow, although I admit that I pay an obscene price for French skin cream. Years ago, I used to go to Paris on business, and those French ladies had very nice skin. And I’m part French (French-Canadian, but it counts because my maiden name has a very cute accent aigu).

Skin is important. I have some everywhere.

As a teenager, I was a Noxzema girl. I can’t for the life of me now figure out what was so appealing about smelling like Vicks VapoRub. But it was medicated.  That must mean it really works, right?

Since those mentholated years, I’ve skin-tested about every soap and moisturizer ever introduced.  Most are interchangeable, although once in a while I’m surprised by astoundingly colorful hives.

So I’ve gone on sprees from ‘Oil of  Olay’ (which come from the Olay plant I guess; or perhaps an Olay fish) to ‘Oil of Crisco’ (it helps you float) to ‘Oil of Expensivo’ – the last of which is my current favorite  – pricey French stuff, which I use with an appetizer of vitamin C oil.  But well worth the mucho francs (or beaucoup dinero or something – I’m only half French) because I have forty-five year old skin on my sixty-one-year-old skull.

But then there’s the rest of my skin.

I’ve got quite a lot of it in other places, and it would be nice if it matched my youngish face. But due to the significant acreage, I can’t use my French stuff (that comes in 1.3 oz tubes). I need shit that I can slather on.  The kind that goes for $4.99 for the economy size. The kind that comes in a plastic bottle that can double as a weapon, or break your toe, if you happen to drop it. (Don’t ask – let’s just say it makes your hands slippery.)

But this means that I have a Parisienne face and a Walmart body.

I’ve just learned of a new product and will keep my skin silky smooth: 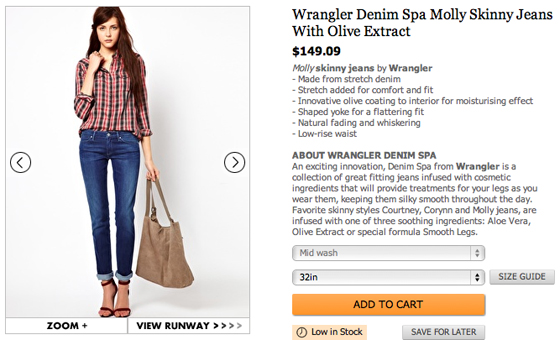 Unbelievable!  Jeans infused with moisturizer!  What a breakthrough!

And you have a choice of three lotions:  Aloe Vera, Olive Extract, or a special secret formula called Smooth Legs. (I suspect that last one may contain Oil of Crisco.)

I have a little issue though. Paying $149.09  (not sure what the $.09 is for, but I price products for a living, and so I’m sure it’s really vital) is a bit more than my $4.99 cream (and I sometimes have a coupon). And I would need to wear these jeans every day, because I can’t be dry and scratchy six out of seven the other days.

So I need seven pairs.

And then of course there’s the little problem of the secret stuff wearing off.  The moisturizer wears out after fifteen wears, and quicker if you wash them – which they recommend you do “sparingly”.

But hey, no problemo!  They sell a spray to re-infuse your moist-jeans, in the three original formulas.

So I’m all set on the bottom half of my body.

For the top half, I figure I can moist-spray all my clothes.  Voila! (That’s real French!)

Of course, I can just buy the moist-spray (which they haven’t told anyone what it costs yet), and forget the $149.09 jeans.

Oh Wait!  (Eureka! – that’s Greek, I think, for Merde Alors!).  I can just slather on the el cheapo stuff from the six pound bottle, and put my clothes on OVER IT! 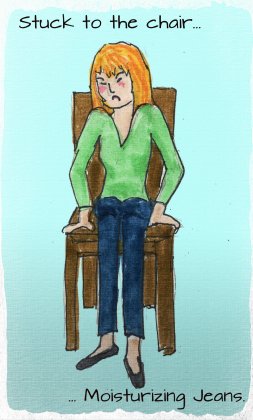