When we bought a  (sorry, ‘pre-owned‘ is the word; BMWs are very sensitive little creatures) convertible this year, we inherited Sirius radio.

Now my husband and I have lots of stations to argue about.

He likes the fifties channel and I naturally like the sixties. I think he ought to like the sixties – he was still a young man back then. The Beach Boys were popular during the early sixties. That should be good enough for him.

But NOOOOO!  He likes the really early rock’n’roll.

Now some of it is tolerable to me. When Sam Cooke sings “You Send Me” – it really does send me (although I am sure that most young people don’t understand the phrase ‘send me’.  I’m not sure what kids say today…’sprung’ maybe? ‘Texted?’).

My husband’s taste, though, runs a little more towards “Running Bear.”

Oh, there was some terrible music in those classic years.

Every time I think I hear the worst song ever…like Pat Boone singing “Tutti Frutti” – I find out I’m wrong – because I hear something like Frankie Avalon’s “Bobby Sox to Stockings.”

Not that there wasn’t any bad sixties music – think “Honey” by Bobby Goldsboro (and try not to throw up in your mouth) – the difference is that I KNOW it’s bad. My husband doesn’t seem to have a problem with “I’m Not A Juvenile Delinquent.”

This has been a long introduction to my real subject: Christmas Music.

I love Christmas Music. Mostly because I love to sing in the car, and with Christmas Music I know all the lyrics. How can you not, when you have been hearing the same songs for sixty years?

Starting on Thanksgiving, one of the Connecticut stations (my beloved little convertible is hibernating for the winter, so I am reluctantly back to over-the-air), plays nothing but holiday music until Christmas.

And I listen all month.  And sing.

Now this station doesn’t play any of the traditional carols until about two days before Christmas. I guess they feel that religious music would be offensive or something to non-Christians, whereas “Santa Claus is Coming to Town” is perfectly secular.  But I really wish they would add some of the glorious old tunes a little earlier – “Joy To The World”, “Hark The Herald Angels Sing”, etc – if for no other reason than I’d have a bigger variety of songs I know the lyrics to. After all, it would be okay with me if I sang “Sleigh Ride” only 650 times instead of 700 times.

But no; they stick to nondenominational “Sounds of the Season”, and I don’t get any “Silent Night” until December 23.

But I sing away.

I have my favorites. Bing Crosby’s “White Christmas” of course, and Nat King Cole’s “The Christmas Song.” And melancholy Judy Garland singing “Have Yourself a Merry Little Christmas” (although I also love my sweetie-pie James Taylor’s version.)

But Holy Santa, are there ever some terrible Christmas songs out there.

I actually like some dumb songs that most people hate – I think Alvin and the Chipmunks’ “Christmas Don’t Be Late” is adorable. And I belt out “Jingle Bell Rock” with the best of them.

But what the heck is up with “Dominick the Donkey”?  And why is it not against the law to play that song?

I guess there must be some four-year-olds who like “Susie Snowflake”, so maybe mothers are relieved when that comes on and little Emily stops whining for a minute.

But compared to the redeeming toddler-quieting qualities of “Susie Snowflake”, there is no excuse for “Wonderful Christmastime.” Paul McCartney is NOT my favorite Beatle, but he wrote some good music way back when. I rock out to “Maybe I’m Amazed” on a regular basis. But somewhere along the line, McCartney must have decided that 12 minutes is all the time he wants to spend now in writing a song. Fourteen minutes tops if he adds in the time he spends on the arrangement.  It is estimated, by the way, that Sir Paul makes $400,000 every year on “Wonderful Christmastime”. Just think how much money there might have been in it had he spent a whole twenty minutes writing the song.

Yes, I was sure this was the worst Christmas song every recorded, but just like there is always a worse Pat Boone song, I was wrong.

Two days ago I heard:

And then I was sure THAT was it.

“The Christmas Shoes” by someone or other.

There couldn’t be anything worse than that. 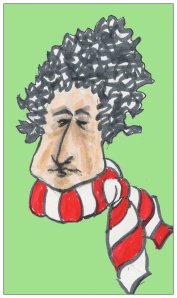