This is a little essay that takes a very serious,thoughtful topic and makes it silly and trivial. Some folks think I excel at this.

I am not a very religious person, but when I was a little girl, I tried to be. I liked the idea of religion because I liked ceremonies. Sacred music and processions and candles were all right by me.  Not to mention vestments. I loved the priest best in white and gold. The green poncho did not flatter him at all.

As much as I liked rituals, however, I couldn’t grasp many religious concepts.

Especially troubling to me was Omniscience.

How could God know everything going on?  Could he really watch all the fish in the Pacific Ocean, and then the other guys in the Atlantic Ocean?  Could he know what each little fish was doing, and all the little birds too, and the ants in South America and the elephants in Africa, and still know whether I was doing my homework or not?

The very idea of keeping track of millions of things at the same time, and paying attention to all of them was incomprehensible to me.

But I think now I understand how it could be done.

Because of the Internet.

There are millions of people out there, maybe as many as the ants in South America, and they are all clicking on different sites all at the same time. Shopping sites, news, games, blogs, recipes, jokes, sports. Videos of symphonies and of cats playing ping-pong.

And everything that everyone does is tracked. All at the same time.

And what you have done in the past leads to what you will do in the future. And the Internet becomes omniscient.

I watch videos of  President Kennedy; I read reviews of Donna Karan cologne; I listen to James Taylor.

I get an email offering me concert tickets and Sweet Baby James CDs. On Facebook, there’s a perfume ad with ‘free’ shipping.  And Amazon not only offers me books on Kennedy, It knows that I am an assassination conspiracy nut, and offers me all kinds of interesting conspiracy nut books. Did you know that there is a secret underground city beneath the Denver airport?

And It knows this for everybody. While It is offering me skinny jeans, It is simultaneously showing organically-dyed wool to my best friend, while my brother-in-law is seeing an ad for beagle treats. (Treats for beagles, that is–not treats made of beagle. Although there is certainly some dude in Indonesia being offered the other kind of beagle treats.)

Why, I am certain that if those fish in the Pacific had computers, they’d be seeing banners on the Fish page of the Huffington Post for L’Oreal Scale Conditioner. And the blue fishies are getting a special kind of blue scale conditioner while the red fishies are getting ‘Just For Redheads’.

But there is another facet of Omniscience that confounded me as a kid. If God knows everything we do, and everything we are going to do, why does God let bad things happen?  If God cares about everyone, why doesn’t He fix stuff?

(Some would resent that I say He and not She… but as I have said before. I am sure that if there is a God, He is male. No female God would invent menstrual cycles. Every month for forty years?  Come on.)

Anyway, How can God allow tragedy?

And – not to be blasphemous (although I guess I already have been) – the Internet has cleared this up for me too.

The Internet may know that I always want to see James Taylor, but I passed on the concert tickets for his Italy tour. Because I don’t HAVE to take every single offer. (Although 50% off on cardigans from J.Jill is a different story.)

I have Free Will. (except for cardigans.)

Of course, God and the Internet both know the future (despite the appearance of free will). God lets me choose, even though He secretly knows what I will choose.  Cardigans, in this case, and not Italy.

Knowing the future, it only goes to follow that God doesn’t always believe me. Like the promises I made while taking that geography test in fifth grade. Or that last really bumpy flight from D.C.

And I guess the Internet doesn’t always believe me either. Even though I have been bragging about my weight loss and how I am getting younger instead of older, it keeps presenting me with offers for plus-sized clothes. What does the Internet God know about my future that I do not?

And worse!  Last week this ad showed up – TWICE! 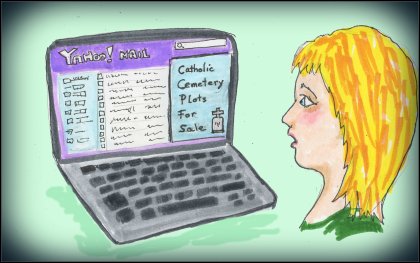