Oh sure, I had been swooning over The Beatles for six months already, but I loved them in that screaming little girl sort of way.

My September crush was a grown-up love for a sexy man. I was thirteen. And in love with Illya Kuryakin.

Illya was the quiet adorable spy in “The Man From U.N.C.L.E”.  Oh he was so cute with his shaggy blond hair and his black turtlenecks. 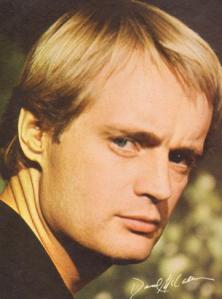 In case you don’t recognize him after forty-eight years, this is David McCallum.

If you watch any TV at all, you can see him about seven times a day on all the airings of “NCIS”.

My first love is an old man. I personally think he still looks pretty good – but my beloved Illya is now 78 years old.

That is simply the shittiest fact I have learned all year.

“NCIS” is actually Grand Central Station for my heatthrobs in their senior years.

First, of course, there’s Mark Harmon. My age exactly (well, six months younger), he’s still extraordinarily sexy – if you overlook the stupid haircut. I think he might actually be trying to prove that stupid hair is not necessarily a barrier to sex. (Or a stupid name.) What I especially like about Harmon’s character on this mediocre show is that he’s had many lady friends over the years – but no young chicks. He dates women his own age. Jamie Lee Curtis is his latest flame. Quite refreshing.

Then there’s Robert Wagner, who has an occasional appearance as Tony DiNozzo Sr. Wagner is 82 now, and I thought he was pretty suave in “It Takes A Thief” in 1968. He still plays the suave ladykiller. And he pulls it off, I might add (smugly).

But it’s still a shock to realize my movie star crushes are all old men now.

Take Malcolm McDowell. When he played H.G. Wells in “Time After Time” in 1979, I was so charmed, I was ready to name my first-born Herbert. (But not Malcolm. Malcolm sat next to me in third grade and he had little sweaty boy stink.) Back to handsome Malcolm: Now he’s 69 and plays evil geniuses on TV.  His hair -what there is of it – is completely white.

My favorite Hollywood sweetheart from the seventies is now in his seventies – 77 to be exact. Donald Sutherland’s sensitive mouth and almost-lisp made me swoon all through “Klute”.

Twelve years ago on a business trip to Santa Monica, I shared an elevator with him. He still made me swoon. 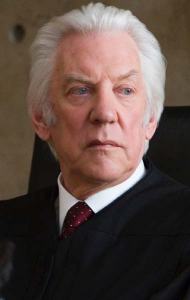 And that voice!  That’s him doing the voice-over in the sensuous ‘Simply Orange’  commercials.

This week I overheard some young girls talking about Keifer Sutherland. They said he was very hot for an old man.