Last week I heard someone say, “Oh no! I’ve become my mother!”

Well, I HAVE become my mother. And I couldn’t be happier. Becoming my mother has always been my goal. She’s smart, sweet, pretty, and best of all, funny.

Except for one tiny thing.

I care way too much about how I look. And how others see me.

With her eighty-eighth birthday next week, Mom still won’t go to the supermarket without her makeup. Neither will I.

And Mom’s influence goes back a long way.

When I was thirteen, I got to be a grownup for a few hours on a Sunday afternoon. I went to the hospital to visit a friend.

Children under fourteen weren’t allowed to visit patients. But my friends and I figured we could pass for fourteen. We had multiple phone conversations that morning. Back in 1964, you couldn’t just conference someone in. No. Linda called Jean and Jean called Shirley and Shirley called Linda back and then Linda called me.

We decided we would dress up and visit Elizabeth. On Friday, Elizabeth had been take to the hospital in an ambulance right in the middle of the school day. She had an ovarian cyst. I had no idea what that was. But they said she was going to be able to have babies. That was good, but it didn’t clarify anything for me.

I was a very young thirteen. I didn’t understand the brochure from the Kotex box (which I didn’t even need at thirteen). I still secretly played with dolls. But I figured it was bad to have your ovary explode, and that Elizabeth was lucky she had two of them

I was also feeling lucky that Jean, Shirley, and Linda asked me to go with them to the hospital. They were pretty popular, and I really wanted to be popular too. They were more grownup-looking that I was, though, and I knew it was going to be harder for me to pass for fourteen.

But I watched an impressive amount of TV. And I had older sisters. I knew what teenagers should look like. I figured I would try for Patty Duke.

It took me over an hour to get ready. I teased the top of my hair (which I had never done before and didn’t exactly succeed at.) And I put on my idea of grownup clothes: 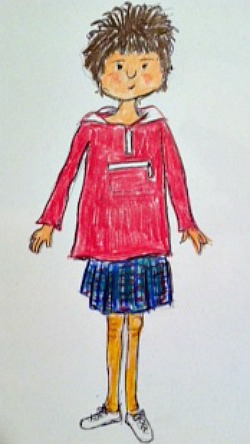 And I went out to meet my friends. My mother was working that Sunday. She was a nurse in the very same hospital I was heading for, but that is only peripheral to my story. My father was watching the game, and didn’t see me leave. And I sort of snuck out.

I look at that drawing, and I think I looked rather cute. But it was 1964, and punked-out hair and windbreakers with pleated skirts was not exactly the height of fashion. (Also, I drew this…just try and draw yourself stupid looking…you still come out pretty cute.)

I met my friends at Noveck’s Pharmacy and we walked to the hospital. A pretty long walk in a cold spring day. I’m not exactly sure what my hair looked like upon arrival. We put on bright pink lipstick before we went in.

Jean and Linda had sizeable chests, and so I stood between them and we walked quickly to the elevator. No one stopped us. We passed for fourteen!

We visited Elizabeth. She was in her pajamas, and she walked kind of bent over. But she was okay, and happy to see us (happy to see Jean, Linda, and Shirley anyway). And I noticed (because of the PJs) that Elizabeth was as flat-chested as me. This concerned me a little, because I thought for sure I would get breasts as soon as I got my period, and now I could see that the two might not be related.

We stayed a long time, and it was a long freezing walk back in the dark.

I arrived at home to find my parents frantic. My mother had come home from work to find me gone, and my father clueless. They had called my friends and searched the neighborhood.

All mothers are good at picturing their kids lying in a ditch, and my mother was one of the all-time best ditch-picturers. My father was furious. My mother was distraught.

Until she saw me. THEN she was furious.

“You wore THAT?” she yelled.