When my nephew was a little boy, he had a friend that he often played with.

Every time they played a game, his small friend always started the game by saying, “I’ll go first!”

I remember wanting my nephew to SAY something about this – to stand up for himself and say, “You went first last time. This is MY turn to be first.”

My nephew was a good-natured kid. Still is. So he always let that little girl go first. Always.

Several people went off before we did. They stepped off the platform and they flew through the air. It was breathtaking. But I didn’t think I could do it – take that first step.

The person who went just before me was a young boy of maybe eleven. His mother was very nervous, but he was happy and laughing and he jumped off as soon as he got the go-ahead. You could hear him screaming, “YYAAAAYYY!!”  all the way across.

That boy made me brave. I stepped off the ledge. I soared.

Years ago, I was working as a financial executive in a male-dominated industry. On business trips, I was often the only woman.

On one occasion, several business associates and I went out to eat at a very nice seafood restaurant. There were five men and me. Since I was the only woman, when the waiter came to take our orders, he naturally turned to me first and asked what I wanted.

Well, we had all been talking about business and sports and the usual small talk, and no one had discussed the menu. So I took a quick glance and said, “I will have the filet of sole.”

And then around the table. Each man put in his order.

This was not good. I was about to sit around the table with my measly paper-thin slice of flavorless fish – surrounded by TEN lobsters.

“Excuse me,” I said politely to the waiter. “I need to change my order.”

And they brought twelve lobsters to the table.

So there is a moral here.

It is not always so bad letting someone else go first.

For my little nephew, he had a friendly happy playmate, and he always got his turn eventually. He never seemed to mind.

In Jamaica, seeing how much fun other people were having, especially that little boy… well, it reassured me, and gave me the courage to experience a delight I may never have otherwise known.

And during that business dinner… Well, I did go first. It didn’t serve me well. It was not an advantage. Better to see what everyone else is having.

I’m not saying you should always be last.

But there are often definite advantages to not being first.

I had a boss once who was rather forbidding and often moody. I learned to hold back in a meeting until a few other people spoke first – to get the lay of the land, so to speak. There was no use making a suggestion or proposal if the boss was not in a receptive mood. I let my coworkers step into the quicksand first. Not brave, I admit. But practical. And survivable.

When cross-country skiing, it is so nice not to have to push my way through heavy, virgin snow. I love skiing in someone else’s smooth, clear path.

My husband was involved for years with drag racing. Watching a few other cars go down the track was extremely beneficial in tuning his own vehicle.

You learn from watching others. And you can’t watch if you’re up first.

Of course, there are occasions when you really need to be first. First off the blocks in the 100-yard dash. First to hit the buzzer in Jeopardy. First in line to get the best seats in the house.

But most of Life is not a competition.

You win just by getting to play. 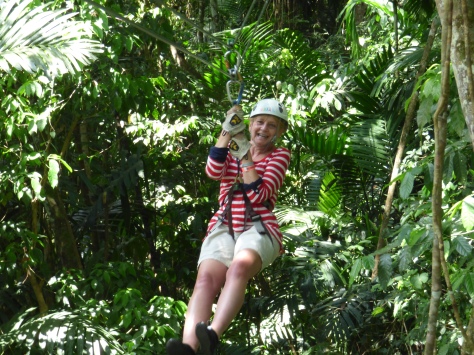